I was only joking.  You know what it’s like after a few beers. We were chatting in the pub, and Danny said ‘I hear John’s bought a greenhouse’.

I said, a little too loudly, ‘Yes, he’s going to grow cannabis’

‘And sell it alongside the peanuts and crisps!’ hollered Harry.

A few heads turned our way, then toward John. John is the pub's esteemed landlord. He’s decided to try growing a few bits for the pub's kitchen; tomatoes and what-not. While I was at the bar he mentioned that all he’s managed to grow so far are weeds.

Anyway, I drove past the pub the next morning and there was a police car outside. I felt dreadful. What had I started?

I ventured back that evening with a well-rehearsed apology. At a  long table, sat a boisterous crowd tucking into a meal and drinking champagne. One of them stood and clinked a spoon against his glass. I recognised him. Seargent Jones of the local police. Actually, it was Inspector Jones. One of his colleagues had been to see John that morning and arranged a surprise get-together to celebrate his promotion. 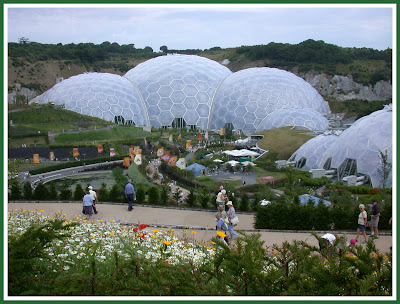 This week's prompt at Sunday Photo Fiction is Sascha Darlington's picture of The Eden Project in Cornwall, UK, a global garden housed in massive greenhouses the size of thirty soccer pitches.