He tried to crack the brittle topping on his crème brûlée but despite stabbing it with his spoon it refused to yield so he jabbed it with a knife which had the desired effect inasmuch as the topping cracked, but the dish leapt off the table sending a slimy slick of crème across the floor. 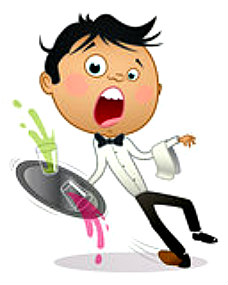 Unfortunately, a waiter carrying a tray of drinks was but a step away and despite making a gallant attempt to stay upright, he started slithering and sliding like a drunken skater and the wallbangers, whiskies and wine launched themselves into the air, drenching everybody in an alcoholic shower!

A couple of drink-drenched diners jumped to their feet knocking their table skew-whiff which sent a plate to the ground splattering chef’s 'plat du jour' all around their feet, and the waiter, realising one was losing her balance, tried dashing to save her but although his legs moved like Fred Astaire performing a tap-dance, he made no forward progress whatsoever.

Then it all went into to slow motion as the young lady fell backwards, the waiter fell forwards, both ending up in a tangle of arms and legs in the slop on the ground and as several fellow diners tried to help the hapless couple they too ended up on their derry-aires taking their food with them.

Suddenly one girl grabbed a fistful of fettuccine and rubbed it into her friends face, someone else did the same, and in no time at all, it turned into one hilarious food fight.

A letter to the local paper, presumably from an ex-sailor, suggested the name of the restaurant be changed to the Mess Deck and several other correspondents thought it would be a great idea if they made the food fight a regular event which really does sound like fun doesn't it?

For Six Sentence Stories where this week's cue word is Plate.