This is St Peter’s, known to locals as Pete’s Place. Sit yourself down on a tombstone while I tell you a little about it. No, not Mischievous Martha's; it's said she pops her hand up from the grave and pinches people's bums!

Father Joseph is the boss here, Holy Jo to us. He gets a fair few customers on Sunday mornings. He has occasional weddings and christenings too, but he enjoys funerals best. He gets competition from the Bustleton crematorium though. I went there recently for Fred’s farewell. He was a heavy smoker, so he probably went ready-cremated! As his coffin wobbled out of sight they played ‘smoke gets in your eyes’. Typical Fred! 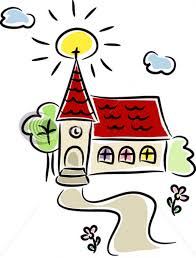 The busiest event at Pete’s Place is the harvest festival. People take stuff they’ve grown. Last year I took a sprout. Arthur was asked to sing a verse of a hymn, solo. He sometimes does. We sang the first verse. 'We plough the fields and scatter..’ and then fell silent for Arthur’s verse. ‘Onward Christian soldiers...’ he sang. Wrong hymn. He’d forgotten his hearing aid again!

Christmas Midnight mass is quite a hoot. The Fish Inn stays open until two in the morning so we can get rid of the taste of Holy Jo’s budget-price communion wine with a glass or two of the mulled variety, and of course one of Molly Mason’s marvelously moorish mince pies.


Right you lot, I’ve got to dash. See you tomorrow.


Arthur who was the subject of my first tale seems to have become a minor celebrity in A-Z land! He will feature in all future stories, so if you missed his introduction you can find it HERE!

Tomorrow I’ll be telling you about Dapper Dan, the pub landlord.