The genteel ladies of the Azalea Avenue gardening club were sitting in a circle nibbling Heather’s fairy cakes and sipping jasmine tea. The upmarket street was famed for its flower-filled front gardens, but beneath the apparent camaraderie lay deep-seated rivalry. Tomorrow they would each pluck blooms from their borders and display them in a fancy marquee on the green halfway down the street.

“Daisy may win again,” said Violet trying to conceal the snarling resentment within.

“What about my dahlias?” asked Poppy.
Just then the truck delivering the marquee rumbled down the street. They all dashed outside and started directing the driver as he attempted to reverse onto the green.

No-one admits it, it’s pretty certain that the to-ing 'n fro-ing was a deliberate attempt to sabotage Daisy’s chances of winning again. It will take her years to restore her borders after the carnage caused by the truck’s twisting and spinning wheels. 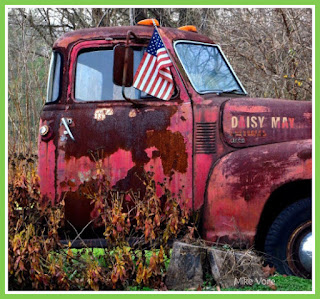