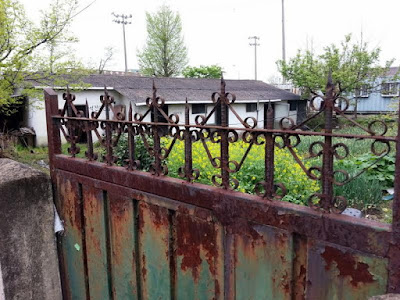 This week's word at Sundays Scribblings 2 is  funeral.

My story is inspired by this week's photo at Friday Fictioneers where each week up to 100 folk post their 100-word stories.


‘Happy birthday Henry’ said George handing him a tatty map of his overgrown garden. ‘That’s where I buried the weapons’ he said pointing to a cross. ‘Do whatever you want with them’

Beside the rusty gates, amid the eroding stumps, rot and choking weeds, Henry thrust his freshly pared pickaxe.

Sparks flew as he struck metal. He’d found them.

With a dazzling flash and deafening explosion, Henry was no more.

George smiled, his resentments appeased. ‘All those years he thought I didn’t know’

Henry didn’t know about the grenades either. George looked from the shattered window and raised his whisky tumbler.

‘See you at your funeral Henry!’