He hadn’t led a blameless life. He’d tried to do the decent thing in fact ‘do unto others as you would do unto yourself’ was a phrase he often repeated. But now and again he’d strayed off the straight and narrow. Sadly he suddenly snuffed it! Without warning he found himself dead! Quite how and when it happened he couldn’t recall, but there was no question about it. He was standing at a junction, a fork in a strange white road and the signpost was blank. 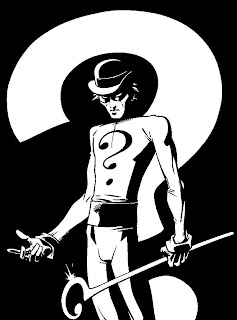 Suddenly an odd looking fellow appeared who bore a striking resemblance to the Riddler from those Batman films!
‘We don’t know what with you’ he chuckled. ‘We don’t know which road to send you up, the one to heaven or the one to hell. You’re not quite good enough for heaven, but then again you don’t really deserve to head to hell. We’ve decided to set you a riddle which if solved will set you on the road to Heaven.Get it wrong and face the consequences'
He stood there with a quizzical look on his face for a few moments.
‘Now let me think’ he muttered ‘Tell you what, I’ll fetch the twins!’
Two absolutely identical little men suddenly appeared from nowhere.
‘This is Rex and this is Tex, oh no, this one’s Tex and he’s..... mmmm.They both know which road leads where. The problem is, Rex only lies and Tex always tells the truth. Unfortunately I can’t tell them apart and I wouldn’t tell you even if I could! So here’s my conundrum. You can ask them one question each. It has to be the same question, so the question is what question to ask?
And with that he giggled and was gone.
I’m pleased to tell you that our friend made it to heaven. He came up with a question which gave him the answer he wanted. Now I’m going to play the Riddler! It’s over to you dear reader - what question did he ask to ensure he took the road heaven?


Give up? I’ll give you the answer below.

He simply asked each of the twins what their brother would say if asked which road led to heaven and which led to hell! Think about it!
Still not sure? Well, let’s suppose the right fork led to heaven. If you were to ask the truthful brother to tell you what his lying brother would say, he’d have to answer ‘left’. If you asked the lying brother what his truthful twin would say he’d also answer left! Our friend simply had to take the opposite fork to the one he was told. And if you I still confused, I give up!

Written for Writers Island 'Fork in the Road'

This weeks prompt is ready and waiting for you! CLICK HERE to join in the fun.