I've been doing a bit of housework around my site, and I've come across a few snippets that haven't made to onto the inter web! Partly because some are short and seem to be going nowhere, and others because they are not quite up to standard! Anyway, I'm having a clear out - a sort of garage sale! This is what I found.


A joke.
President Bush was travelling through London with the Queen in an open horse drawn carriage. Suddenly one of the horses farted. The Queen said " I do apologise". The President said " Oh. I thought it was the horse" 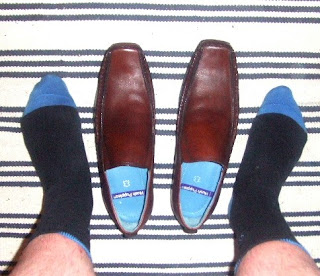 New shoes.
In attempt to keep abreast with the latest fashions, your scribe decided to purchase a new pair of shoes featuring the latest 'chisel toe' look. This is, in effect, a return to the 70's when shoes were shaped differently from the wearer's foot. Like most men. my feet don't have square ends! Well, I assume that to be the case. I can't say I've made a study of the male foot, but I imagine mine are fairly representative of feet in general.

As a result, the said footwear needs to be some 2 inches longer than would normally be the case. Fine, until you take your first tottering steps in a pair of shoes the length of a pair of skis! At least that's how it feels! I'm yet to venture outdoors. That will come tomorrow when I visit London. I just hope I don't get the ends caught in the tube train doors! 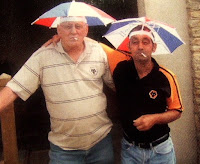 Smoking ban solutions.
One pub in Lincolnshire has come up with a novel way in which to protect smoking customers from the elements now that the ban on smoking inside has come into force. Instead of spending thousands of pounds on a shelter, she is providing nifty little personal protectors - small umbrellas that attach to the head, and leave both hands free to do whatever you want them too!

A joke
James Bond walks into a bar and sits next to an attractive lady. He gives her a quick glance then casually looks at his watch.
The woman notices and asks "is your date late arriving?" " No" says Bond "Q has just given me this state-of-the-art watch. I was just checking it"
The intrigued lady asks "A state-of-the-art-watch? What's so special about it?"
Bond explains" It uses alpha waves to talk to me telepathically".
The lady asks "What is it telling you now?"
Bond says "Well, it tells me you are wearing no knickers". The lady giggles: "Well, your special watch must be broken. I am wearing knickers".
Bond taps it and smirks "Damn thing's an hour fast". 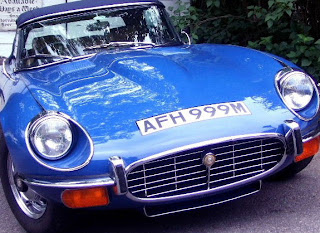 That blue car
I've had at least 3 enquiries about the make of car I was sitting in, in the photo that recently graced the sidebar of this page. I was in fact a Jaguar E-type 5.8 of 1973 vintage which has recently undergone a complete rebuild. In the US it was known as an XK something or other! Anyway, it's wickedly fast and enormous fun to drive.

Keep your wits about you
I live in a quiet little seaside town where nothing much happens. The police wander round with their hands in their pockets, and everyone co-exists in a haven of peace and harmony. Except one district ,where angels fear to tread. Here the shops are protected by grills at night and drivers lock their car doors if they have to stop at a pedestrian crossing. 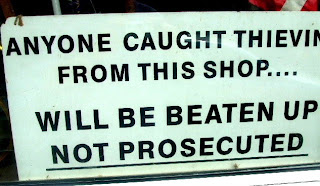 Instead of flowers in the front gardens, the houses are decorated with broken cars propped up on bricks. Menacing dogs strain at their chains in an effort to break free from their tattooed owners. One shopkeeper has decided to police his own premises in a fashion typical of the area. Others have simply given up, and their abandoned stores stand empty.
But there is a sense of community. Albeit a community which only tolerates it's own. I went to school there! That could explain a lot!

Well there you have it. As I said, nothing particularly earth shattering! But at least it's given me some badly needed space!