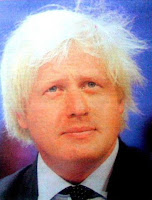 "Voting Tory will cause your wife to have bigger breasts and increase your chances of owning a BMW M3" So said the Conservative member of parliament for Henley on Thames in October 2005.
Boris Johnson has declared his wish to become the Tory candidate for the post of Mayor of London. One of the most popular and well liked personalities in British politics, he has gained notoriety partly due to a string of blunders which have led him to make apologies on several occasions.
He claimed that the city of Portsmouth was "too full of drugs, obesity, underachievement and Labour MPs". As editor of the political magazine 'The Spectator' he succeeded in insulting the people of Liverpool by accusing them of "wallowing" in the death of Iraq hostage Ken Bigley. He also claimed that the folk of Papua New Guinea were cannibals! He even said, and this is incredible, that he found the wife of our former Prime Minister, Cherie Blair, "sexually attractive"!
These sorts of gaffs would normally spell the end of a career for most politicians. But all bumbling Boris has to do is utter an apology and all is forgiven! In fact, with each episode, his popularity increases! He is one of the only politicians who is always referred to by his first name. He is universally liked by politicians of all persuasions, and even people with no interest in politics know and like him.
Even so his former boss, one time Tory leader Michael Howard, sacked him from his post as Higher Education Spokesman in December 2004. In true Boris style he said to an assembled crowd of journalists "My friends, as I have discovered myself, there are no disasters, only opportunities. And indeed, opportunities for fresh disasters."
Such is his popularity that he has hosted television shows such as Have I Got News For You, and is a regular guest on chat shows. He has a well loved column in the Daily Telegraph and his opinion on all things politic are eagerly saught by the media. His books, such as the tome on Rome with it's accompanying TV series are national treasures!
All this hides the fact that underneath that mop of unkempt blonde hair, is a highly intelligent and interlectual person. His 'posh' upbringing and Eton education would under normal circumstances be an obstacle to being accepted by his fellow Londoners. But not in the case of Boris.

His task now is to peruade the electorate that he has the ability to take seriously the job of Mayor of London. The current incumbant, Ken Livingstone is another charismatic character who is determined to return for a third term. If Boris Johnson is chosen as the Conservative candidate, we will have a fascinating few months ahead of us.
"My chances of being Prime Minister are about as good as the chances of finding Elvis on Mars or me turning into an olive" he once said. There is however, a very good chance that he will be the next Mayor of London.