It goes straight through me dear! 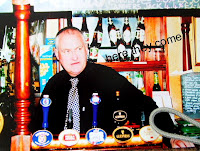 It's the start of the lunchtime session at the Bulls Head. We eagerly await the army of pensioners that invade our restaurant to take advantage of the oldies special deal.

Cars manoeuvre this way and that - engines revving wildly. Drivers,who should have thrown their keys away years ago, attempt to position themselves between white lines painted on the forecourt surface. Their partners wave their arms around like demented windmills under the mistaken impression that they are helping the hapless drivers.

Eventually, they totter across the car park and stumble on the step as they make their triumphal entry through the bar doorway.
" Are you doing food dear?" they cry! "You know we are you silly old bat" we think. "Why else would we be standing here with menus?"
"We'll sit there dear" says an elderly lady, pointing to our largest table with her walking stick.
"Rather you didn't" says our barmaid. " there are only two of you, and that table sits eight"
" We'll sit there then" gestures the old biddy. "
"That's reserved" says barmaid " They booked".
" So did we " says old lady.
" But you didn't specify a table" says barmaid".

And so the conversation goes on until the old couple agree to sit on a small table in the corner despite the fact that they claim not to be able to see anything because of the dark!

Another couple are struggling with the menu. Every time the barmaid makes a suggestion it is met with an objection. They don't like spicy food. They don't like cod - they prefer haddock. He wont eat any 'foreign muck', and she dare not eat lettuce." It goes straight through me dear" she says.

Several times a week Glass Eye Gary comes in for his lunch. One eye darts hither and thither like a Big brother camera, whilst his false one stares straight ahead! After about an hour he makes his regular journey to the toilet, but not before he pops out his glass eye and drops it into his beer! "Someone drank some of my beer once" he says! He says it every time! " Won't do it again" he says. I had an old lady at my previous pub who did a similar thing, but it was her false teeth that she dropped into her Guinness! " Drink this and they'll bite your nose off" she used to say to startled onlookers!

One old boy comes in every week and always asks, without fail, if we have found his leather belt. "It was a good one. Quarter of an inch thick" he says. Seems he left it in the pub 37 years ago and he still lives in hope of its safe return! No one has ever asked him how or why he left it here in the first place!

Then there is Bert. He is 92 and has been coming to the Bulls Head since he was a boy some 78 years ago. And for all of his pub-going life he's sat in the same place and smoked his smelly old pipe! We have a smoking ban now, and he is really having difficulty in understanding why we have to help him to an outside bench when he wants to light up. " Bloody government. Like a police state"

Bowls of soup go out followed by plates of steaming steak pies and roast beef. Most don't finish their meals. " I eat like a sparrow" we are told several times a day. " May I have a doggy bag dear? I'll have the rest tomorrow"

We give them a small bowl of ice cream to finish their meal. Today one poor lady was struggling with two of her friends who were stone deaf. She was attempting to explain the various flavours of ice cream that were on offer, whilst my waitress patiently awaited a decision.
" She says that she has coffee, vanilla or strawberry" she yelled." But no toffee flavour today"
"I'll have toffee " says one of her friends.
"No dear" she says " There is none. Have coffee today"
" Oh yes, I like toffee"
" NO! C-coffee, not T-toffee!"
" No, perhaps I won't have toffee. I think I'll have raspberry"

And so it goes on! Five days a week! Every day the same as the last but with a different cast of characters uttering the same tired old lines!