When he was a child he had a plan; a plan to take him to where he wanted to be. But his goal was like buried treasure at the end of a rainbow. With every step forward it moved one step away.

He asked his grandfather for advice. “Lad,” he said, "to reach life’s goals you must run when you can”. But he ran too fast stumbling along the way leaving a trail of failures in his tracks. “Walk if you have to” he’d said. But he walked with head bowed passing so many of the opportunities that life offered him. “Crawl if you must,” his grandfather said. He crawled, he pleaded, he begged, but beseeching gained no favours.

When his grandfather passed away, black clouds of despair covered the blue sky of hope. The last words he’d uttered echoed in his mind. “Never give up lad” he’d said. With that, a rainbow appeared. He gazed heavenward. “I won’t let you down Grandad” he yelled. 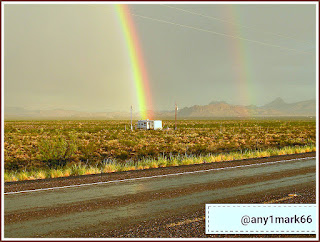 This week's picture is provided by @any1mark66