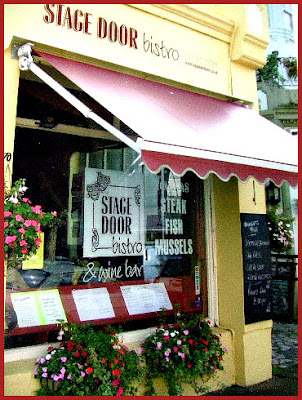 The Stage Door Bistro and Wine Bar in Carlisle Road Eastbourne sat just off the seafront and opposite the town's thriving theatres. By gaining a late licence and advertising in the theatre dressing rooms I was assured a steady stream of thespians, musicians and other assorted entertainers.

Within days of opening, I had Shirley Anne Field clearing tables, and the following week the charming Edward Hardwicke (Dr Watson to Jeremy Brett's Holmes) captivated us with tales from his film stage and television career. Other eaters in the early days included Van der Valk in the form of Barry Foster, Christopher Casanove of Dynasty fame, and Linda Baron. Arkwright is not the only one to have snuggled up to nurse Gladys's ample bosom!

Simon Ward was a quiet sort of a chap, but not so his daughter Sophie who was always the life and soul of the party whenever she visited us. Talking of daughters of famous fathers, Deborah Moore - offspring of Roger - spent a week with us on one her first tours away from home. She seemed a little shy and insecure and preferred to eat perched on a bar stool where she could engage in conversation with my waitresses. Imagine lifting the phone to hear James Bond on the other end asking to speak to his Debbie! Another Moore was Patrick Moore who enjoyed a bottle of my finest Bordeaux before taking the stage at the Congress for his travelling rendition of the Sky at Night.

I always got my celebs to sign their names on the posters advertising their endeavours. Most included a complimentary line or two. Christopher Timothy wrote 'the steak was ace'. Ainsley Harriot scrawled 'To Keith - keep it moist and sticky' and John Challis, best known as Boysie, simply recommended my customers to 'Eat at Joes'. When he wanted another drink he stood and shouted 'Marlene!'

My favourite scribble, however, was from Dr Who Colin Baker who wrote 'Now that's what I call a Stage Door'. 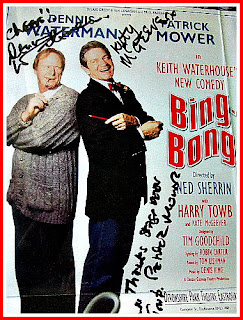 Most of the stars were friendly, some overwhelmingly so, others not. Nicolas Smith, Mr Rumbold from Are You Being Served, refused to sign his poster on the basis that he didn't believe we'd put it on display! And then there was Ronnie Corbett. Mmmm! But who were my favourites? The late Trevor Bannister came on two tours and was just as delightful as he was when he played Mr Lucas, in Are You Being Served. I'll never forget Ami MacDonald's' squeaky voice nor Sue Hodge who demonstrated her famous cart-wheels last seen in the Cafe Renee on 'ello' ello where she played Mimi. Her 'boss' Renee, Gordon Kaye, came to us with his partner Barry Howard, the ballroom dancer Barry from Hi de Hi. We sat up most the night talking. A true method actor, Gordon, reverted to his French accent whenever he spoke about his role in that classic sitcom. Also from Hi de Hi was Jeffery Holland, Spike, and Ruth Madoc who was exactly like her alter-ego Gladys Pugh. David Griffin who played the Entertainments Manager on the same show, and Hyacinth Bucket's long-suffering next door neighbour, regularly turned up in lots of Summer productions, always bringing his son with him who we saw grow from nine years old to a young man over the years.

Then there was Frazer Hynes, ex Emmerdale Farm, and his former wife Gemma Craven, though thankfully not at the same time as they had recently undergone a very public and somewhat acrimonious divorce. She came back the following year in the same production with co-star Peter Duncan who is best known for his skills with producing things from Fairy Liquid bottles.

Susan Penhaligon who, though having advanced a few years, was alluring as ever she was in Bouquet of Barbed Wire. She came on about three tours and always made us her first port of call. Frank Finlay from the same production also ate with us on many occasion and was the epitome of charm and good manners. There was a time when George Sewell was never off our screens. Remember his long-suffering Police Inspector in the Detectives? He was another of our favourites and on his frequent visits over the years always ate his supper at the bar rather than with his colleagues at a table. One of his blundering DC's in that series was another regular eater Robert Powell. Strange as it may seem I'll never forget his eyes! And it's not every day you have Jesus in your bar!

Then there was Lorraine Chase who took me out for a meal and Sandra Dickinson who didn't. Jill Greenacre from Brittas and Lewis Collins from a TV drama the name of which escapes me. Tim Brooke Taylor, Hannah Gordon and Brian Murphy. The list goes on! Roger Lloyd Pack, sadly didn’t bring Trigger’s famous broom with him! 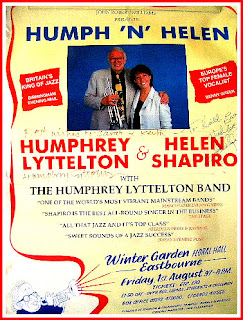 Wendy Craig was fabulous. She spent ages one evening with one of my waitresses who was too young to remember Butterflies, and took through her career. Another of my girls got to sing the World Song with Luke Goss. When she left me I gave her his signed poster as a memento of one of the greatest moments of her life. Other visiting musicians included the legendary Humphrey Littleton and singer Helen Shapiro.

Then there was the star we nearly met! The restaurant was packed. It usually was late at night when a big name was in town because there was a good chance you'd get your programme signed and see your idol at close quarters. Anyway, this night a burly minder came into the bistro to request a table for his charge and my daughter Penny explained that we were full. She had actually turned away Bill Wyman of the Stones! Well, she didn't know who he was. It didn't exactly go down well with the expectant crowd I can tell you!

Eastbourne hosts a major tennis tournament each year just across the road from the Stage Door. A young Venus Williams graced our establishment on more than one occasion as did most of the other international tennis stars including Martina Navratilova. One year she had just launched her autobiography and the newsagent over the road had a life-size cardboard cutout of her in the street advertising her book. Within seconds of it being put out, it was descended upon by stampede of somewhat 'butch' ladies who proceeded to tear it limb from limb each taking with them a piece of their disembodied heroin!

I'm a bit of an Archers fan so when a number of the cast rolled into to town to perform their readings of rural poetry, I looked forward to providing them with sustenance. I got to talk to Edward Kelsey who's clipped accent sounds nothing like Joe Grundy and Rosalind Adams - Clarrie, who does! Felicity Finch thankfully does not have Ruth's awful brogue, but Nigel Pargitter in the form of Graham Seed sounds exactly like his character. Tamsin Gregg, better known as Debbie Aldridge, was fab and just like the character she played in the Green Wing.

One year the Lib Dems held their conference over the road, and Ming Campbell was a daily visitor as was Shirley Williams and other assorted politicos. In their wake came Michael Brunson of ITN (what a misery) and Tom Bradby. 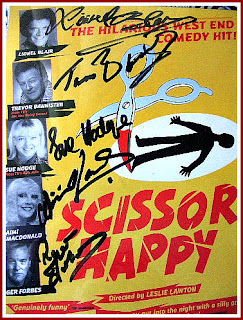 Eastbourne Theatres always have a Summer Season and one year it was Scissor Happy - an audience-participating farce starring Lionel Blair and many of the personalities mentioned earlier. While most stars prefer a quiet corner when off duty, Lionel was ever the true professional and loved nothing more than meeting his fans. Most days - sometimes twice a day, he would take up his position at the table facing the door and treat everyone he met like an old friend. I can honestly say that by the end of the six-week run I was able to count him amongst my friends! On the last night, he and the cast invited my daughter and me to join them at the Buccaneer for a meal. Not long ago I got a message from him saying how disappointed he was to find the Stage Door closed.

Not all memories were happy. One night Dennis Waterman came in with Patrick Mower. They had spent some considerable time in The Cavalier beforehand. I'll leave the rest to your imagination, but needless to say, they weren't welcome back!

The Stage Door Bistro and Wine bar is no more. I sold it and the new owners got it badly wrong. It was probably the worst decision of my life. But it still lives on in the memories of all who visited it and worked there.