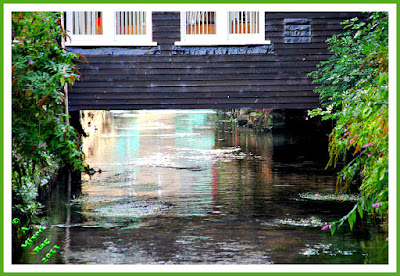 'I've had enough' she screams. 'Then leave' he yells. China smashes on the floorboards.

Beneath their feet, the river tumbles on its way.

'Ripe strawberries' bellows the trader in the bustling market. 'A pound a punnet'.

The river runs past unnoticed.

'It's your fault' he shouts surveying the damage to his car. 'No, it's yours the other motorist argues.

Close by, fish leap from the trickling water.

'Another bloody truck blocking the road' moans the frustrated driver thumping his steering wheel. A cacophony of car horns fills the air.

Alongside, a mother duck travels downstream, in her wake a line of frantically paddling ducklings.

A train crosses the metal bridge its wheels noisily click-clacking on the tracks.

Below an angler tugs his bowing rod as he retrieves his catch.

A sudden downpour; leaden raindrops roar as they bounce from the road.

A thousand silver coronets jump from the surface of the river, then all is calm again.

A swan glides serenely past unmoved by the efforts of the bandsmen.

A songbird sings and a woodpecker rat-a-tats.

The river winds its way across the field leaving the city far behind.