Everywhere they went, she followed a couple of steps behind. In church, Daisy sat in the pew behind her husband. In their car, Michael drove and she sat in the back seat. I once saw them in the cinema sitting in tandem. The casual observer might well have assumed that Michael was in charge. But no, Daisy was the boss; the one steering the matrimonial ship.
Michael fell for Daisy at first sight and wooed her most passionately. He asked her to marry him and after begging her repeatedly for an answer she eventually agreed. Being a man of modest means he was unable to meet her demand for stylish marriage with a horse and carriage, but he promised her a surprise alternative. She did not, however, anticipate leaving the wedding reception on the back seat of a bicycle made for two!  She never forgave him and from that day henceforth Daisy took charge.

*Loosely based on the 1892 song Daisy Bell (a bicycle built for two) by Harry Dacre which you can hear below! 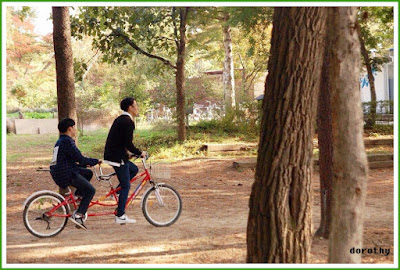 For Flash Fiction for Aspiring Writers where Dorothy has provided us with the photo prompt.