For Sunday Photo Fiction where we have a picture of Doctor Who's Tardis!

Disguise in love with you!”

John got home from work later than Lea and they always did a knock-knock joke before she'd open the door and let him in.

“John, you are scaring me”

Lea edged open the door a little. A man in a black hoody pushed his way in and slammed his fist on the light switch plunging the flat into darkness.

He switched on a torch and held it beneath his chin.

“Get out” she shouted shoving him back. He staggered but held his ground. Still, with the torch lighting his face he lowered his hood. She recognised him as the creature from whom she’d fled two years earlier. She froze with fear. He turned the torch on her.

“What the hell do you want Mike?”

“Stupid question Lea. I want what's is mine. I’m taking you home”

John used his key to let himself in. Lea was nowhere to be seen. 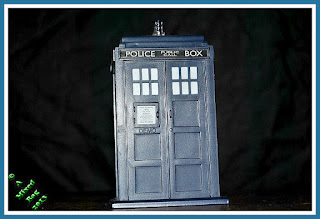