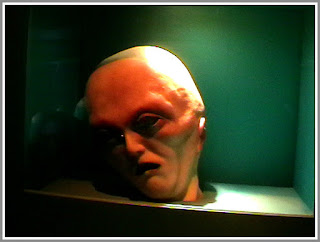 “Such a good ventriloquist was he, that many suspected the dummy to be, in reality, an actual person of diminutive stature,” said the frock-coated guide as he shepherded his enthralled followers through the Variety Theatre Museum. They stopped beside an exhibit. ‘Victor Ventura’ said the sign on the wall.

“Some believe the dummy had a life of its own; that it would sneak out of its case at night, leave the house and startle drunken revellers as they staggered from the Red Lion public house at closing time” said the guide. “He originally worked the dummy with his right hand, but he suffered an unexplained accident in which his right hand was crushed severely, but rather than cease ventriloquising, he thereafter operated the figurine with his left”

“The dummy probably crushed it from inside its chest” giggled an onlooker. The others murmured in amusement.

“You may speak in jest sir,” said the host, “but many believe that to be close to the truth”

‘It was an ugly dummy" said one visitor peering at the head from this way and that.

“That is not the dummy’s head madam” uttered the guide.