He was a ‘gottle of geer’ type of ventriloquist. Vic-the-Vent would stand on the corner entertaining passers-by. They were more amused by his ineptitude than his jokes. I felt sorry for his dummy. Its name was Bert.

‘How are you today Gert?’  Vic once asked. That got a laugh!

His audience gasped in disbelief.

Bert's head spun round and his bulging eyes stared at the heckler. ’I've had enough of being mocked. I’m in charge now’ he yelled.

I hear they’re going on Britain's got Talent next season. 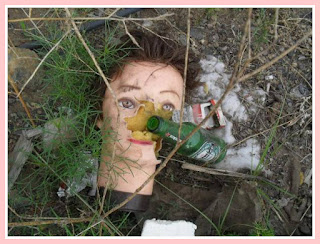 For Friday Fictioneers which is hosted by Rochelle. The photo is supplied by Liz Young. I've imagined the head in happier times!