A story about time travel for today's  prompt at Mindlovemisery's Menagerie 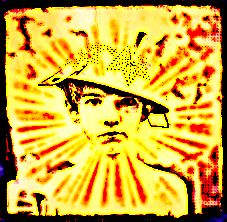 Tom saw a programme on television about people who could travel back to times gone by, and forward to sometime in the future. That looked fun. All they did was sit in a big chair, put a funny hat on their head, push and pull a lever, then suddenly they found themselves in another year. ‘I could do that’ said Tom.

First he needed the chair. It had to be big. Daddy had a big black one which spun around in front of his desk. He wouldn't need it today because he was fiddling around in the garden. Yes, it would would be perfect.


Now, for the lever. ‘I know, a big wooden spoon from the kitchen’ said Tom to himself. He found the biggest one he could and tied it to the arm of the chair with a piece of string from the kitchen drawer.

Then he needed a helmet. He looked all around, in the cupboards and on the shelves and then he spotted a shiny silver colander hanging on a hook over the sink. ‘Perfect’ said Tom.

He was sure that the helmet he saw on TV had an aerial on the top. ‘I know’ said Tom. And he dashed up to the landing where mummy had a big pot of dead sticks and things. He could never understand what they were doing indoors, but Mummy told him they were dried foliage and she said they looked nice. Anyway right in the middle were some curly ones. So he carefully pulled one out and poked it into a hole in the colander.

He climbed up into the chair, put the helmet on his head, closed his eyes and pulled back the lever.

When Tom opened his eyes he was in the park. It didn’t look quite the same though. The swings and the slide were still there, but they were brown and made of wood.Then running along a path came a boy who looked just like his best friend Charlie. But Charlie usually steered his remote control car along there and this boy was chasing a big wooden hoop which he wacked with a stick. And he was wearing funny brown clothes. Trousers which stopped at his knees, long socks, a brown jacket, and a brown cap on his head.

Walking behind him were a man and a woman who looked just like Charlie’s Mum and Dad. But the woman had a little hat with feathers in it on her head, and a brown and white spotty dress down to her ankles. Then he noticed she had a dead fox around her neck! And Charlie’s Dad normally wore a baseball cap, but this man wore a brown hat with a brim around it, a stripy suit and shiny black and white shoes.

He didn't like it back in old days so he pushed the lever forward to take him to the future. The chair felt like it was spinning and when it stopped he was back in the park again. Only there was nobody there. There were no birds singing. The flowers were dead and the trees had no leaves. The lake was empty and everything around him was grey and dusty.

Tom suddenly heard a ghostly voice in his ear ‘Don’t let this happen Tom’ it whispered.

Tom closed his eyes because he didn’t like what he was seeing. He gave the lever a push to take him back home.

'What are you doing in my chair young man? ‘said Daddy.