I wrote this for The Sunday Whirl. I confess to having 'slashed' one of this week's words 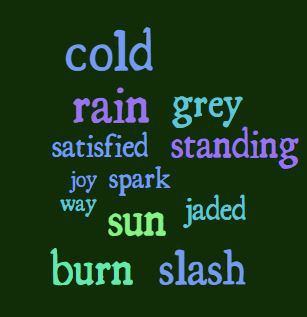 As with every year, the invite that dropped on his mat asked that the guests each bring some food to the firework party. Normally Jim would have popped down the seven-eleven for a bag of iced buns or something, but he’d always felt a bit of a cheat as he witnessed one gastronomic masterpiece after another being escorted onto the patio, each bearer juggling for the best spot on the table before standing back to admire their respective creation. He came to a decision and burst into song, warbling “Let’s go bake a cake” to something approximating the tune of the kite song from Mary Poppins!


He found a recipe on line and set off to gather up the ingredients. Satisfied that he’d got all he needed he returned to his kitchen. He stuck a white plastic bag on his head thinking it made him look more chef-like, then set about cooking his first ever cake!
You have never seen such a mess; butter on the floor, flour on the ceiling, egg smeared up the walls, his kitchen a veritable culinary bomb crater! Seemingly unaware of the scene of devastation surrounding him he mixed, he stirred, he sampled then poured his gooey beigy-grey concoction into a cake tin. As he had forgotten the bit about preheating the oven, he stuck it into the cold one, switched it on and doubled the cooking time to allow for the heating process.  “Quod erat demonstrandum” he yelled making full use of the only Latin phase he could articulate. “QED, quite easily done!”he chirped. (Saying something and knowing what it actually means are of course two entirely different things!) He looked at his watch. Two hours to go. Feeling somewhat jaded after the process thus far, he poured himself a drink, sat down, drank it, and another, and another, then promptly fell asleep. Three hours later he awoke to the smell of burning.
Jim rushed the oven, flung the door open, seized the tin, screamed as he scalded his fingers, let go sending it across the floor, grabbed a cloth and then hurtled his burnt offering up onto the worktop. He tipped it out then stood back to consider what his best plan of action was. Having come this far there was no way he would give up. After applying plasters to his throbbing fingers, he trimmed it and chopped it until it was about half of its original size, then concluded it was perfect albeit somewhat smaller than intended. “Worry not"he muttered “I’ll double up on the thickness of the icing”. He knocked some up, and then proceeded to rain it down from a great height onto the top and down the sides of the remains of the cake. As the cake was still hot, it straight away ran off and ended up resembling a foaming white moat around an ancient castle. Not to be deterred he kept scooping and spreading until eventually most of it stuck on. It looked a bit bare so he flung a half packet of M&M’s all over it. Oh joy, he was delighted! Just one thing to do. He remembered once seeing a cake on a TV programme which had a tube stuck in it, and sparks flying high into the air. So he went get his bag of fireworks, searched until he found one which looked similar then pushed into the top of the cake.
The sun was setting and it was about time to head off to the party. He hooked the bag of fireworks over his arm and proudly set off down the street carrying his creation before him. After almost tripping over a wretched little dog which was trying to climb up his leg to get the cake, he arrived at the party. He proudly carried his work of art through the assembled crowd to the sound of what he thought were gasps of admiration. He pushed several food laden platters aside to give himself centre position. Everyone looked on as with a flourish he produced a lighter from his pocket. The crowd began to shuffle backwards as he lit the blue touch paper of the cake’s pyrotechnic adornment.
The explosion was loud; very loud. Louder indeed than any of the firecrackers exploding in the neighbouring garden. And not just from the cake but also the bag of fireworks draped over his arm. Everyone at the party got a piece of cake and several of the people next door too, but not in the way Jim had intended.
He was only in hospital for a few days and after the events of that fateful night he vowed never to make a cake again. “It can’t be difficult to cook a curry” he said to himself as he wandered homeward “I wonder what it is that makes it hot? I think I might just know!”