one two one two testing....

A short story for Sunday Scribblings 2 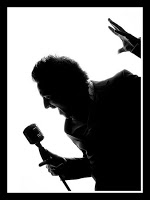 Like most little children he would strut around the kitchen wooden spoon in hand, miming to the latest pop song. As a teenager he stood in front of his bedroom mirror miming into his hair brush. It was obvious to him from his very early years that the microphone was a natural extension of his arm. Trouble was, when miming changed to singing things went rapidly downhill. He looked the part, but oh dear, the sounds he produced upset every dog in the district! As he grew older the dream he had of becoming a performer became more and more distant.

Mike was watching a stand up comedian on television one day, and then it came to him. You don’t need to be a singer to use a microphone.
As soon as he was old enough he started visiting local pubs when they held open mike nights. Would-be comedians would scamper up onto the podium, grab the microphone, tell a couple of poor jokes and more often than not get booed off again. And our Mike was no exception. But he was determined not to give up. Something inside told him over and over again that one day people would want to listen to him. It was just a matter of time.
Fast forward three years. Mike has achieved his ambition; he is now the king of the microphone. He spends a few hours each afternoon adjusting and perfecting his words making sure he meets his daily deadline. Every evening hundreds of folk eagerly await his voice and today is no exception. Unseen he checks the time on his watch, clears his throat, takes a sip of water then slides the switch on the microphone to on. The speakers crackle into life and the assembled hoard falls silent in fervent anticipation.
‘Good evening ladies and gentlemen’ shouts Mike. ‘The train now standing at platform three is the eighteen ten service to London Waterloo.’