Previously in A Chequered Career
I turned up at S G Smith Motors where on the forecourt stood a crescent of gleaming Morris Minors…..in the middle sat a brown one. I commented to the guy standing next to me that I hoped I wouldn’t get it. He agreed saying that it looked like a dog turd on wheels. Half an hour later I was holding its keys…….I was promoted to Product Specialist….. Hughie Holmes handed me over to Tik Fasham, a short man with neatly parted glossy black hair and a thin caterpillar like moustache….. and a permanent sergeant major expression.

CHAPTER FOUR  -  AS SAFE AS A LETTER IN A LETTERBOX 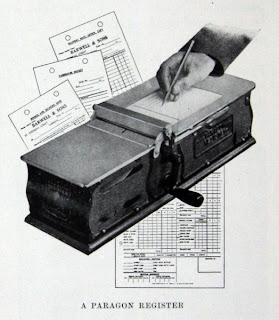 In no more than a moment I was catapulted from the layed-back style of Hughie to the military regime of Mr Fasham. Suddenly I found myself working from nine to five with a twenty minute break at midday when we would sit at a Formica table in some café or other drinking coffee and nibbling sandwiches, whilst Tik delivered a critique of my progress to date. Retailers were rapidly moving away from receipt pads and replacing them with those ‘vulgar’ (Tik’s expression not mine!) chrome adorned National Cash Register machines from America which spurted out a typed paper receipt as the cash drawer flew open. But we had a compromise. Our machine still allowed the assistant to write a proper receipt in a window on top of our cash register. A quick tug of a handle and the customer’s copy shot out, whilst depositing a carbon copy in a locked compartment where it was safe from the efforts of unscrupulous shop assistants bent on making alterations to their advantage. “As safe as a letter in a letter box Mr Hillman” Tik would say. “What is it young man?” “Safe as a letter in a letter box Mr Fasham sir” I’d reply. After a week of mental and physical torture I was released to preach the word about Paragon Registers all on my own. And though I say it myself, I did pretty well at it.

One day I was walking the streets of Wembley in search of the lucky few who would able to benefit from my amazing machine. I came across a greengrocer’s shop. Coopers it was called. As I walked in a gentleman appeared from behind a mountain of vegetables. He looked familiar. I proffered my hand in order to shake his, and a second later it felt as if my hand was being crushed. I tried not to give anything away by way of facial expressions for fear of appearing wimpish. It was then I put the name of the shop and the grinning face together. Heavyweight boxing champion Henry Cooper. At least I thought it was, but actually it was his twin brother Ben. But a second or two later ‘our Enry’  popped up from behind the bananas and  finished off the job that Ben had started on my throbbing hand. It seemed that when he wasn’t knocking seven bells out of Cassius Clay he lent a hand at the family emporium. And yes, he gave me an order for a couple of machines! 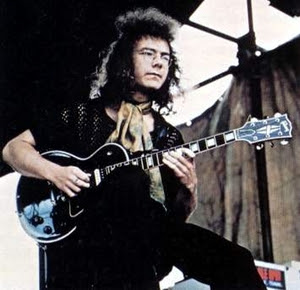 Meanwhile my social life was getting better by the day. My friends and I moved to a flat in the Irish quarter of London, Kentish Town. Our flat  was one floor up in a Victorian house, and the one below was occupied by an up and coming rock band called Giles Giles and Fripp. The thing I most remember about their flat was a portrait of the Queen framed in a toilet seat which hung above the fireplace! They were a fairly studious bunch who took their music very seriously and hardly fitted the image of the drugged fuelled and badly behaved groups of the 60’s. They did however enjoy the parties we held upstairs. One night after a particularly crowded one they went downstairs in the early hours of the morning to find that their ceiling had caved in! They were quite big on the London scene at the time, but eventually Robert Fripp left to become the lead guitarist of King Crimson. He also worked with David Bowie on his recordings and even composed the sounds for Windows Vista! My visits back to Hailsham were becoming a little less frequent. I spent an increasing amount of time at our flat and with Sarah. As time passed I had less and less in common with the friends I’d grown up with. They were a somewhat unambitious bunch set in their small town ways. Most of them are still there today. One friend however, Roger was a bit more ambitious and he went away to train as a teacher. He was the only one I was to keep in touch with.
.
In early 1970 Lamson Paragon opened an office in Crawley near Gatwick Airport. Mike, Bernie and I were given the opportunity to go down there and the work new territories in Sussex.  And so it was that we left London behind and rented a very grand house in the lovely town of East Grinstead. I was to carry on as a Paragon Register Specialist, and once a week I would accompany one of the general salesmen on their rounds to help them sell a few of my registers. Bernie was to sell our new payroll system, and Mike focused on another of our products. We all reported to the branch manager, a Mr Venner who was devoid of all personality and wasn’t really interested in work at all. He just wanted a quiet life and so we were left very much on our own. We didn’t mix socially with our workmates. The only ones I clearly remember were our administrator Helen, salesman Mickey Guess and a gay guy called John Fitzpatrick who was also known as Patrick Fitzjohn!

One memory that still makes me cringe is the occasion on which I visited McBeans Orchids in Cooksbridge with Mickey G. They were, and possibly still are the foremost growers of these exotic flowers in the UK. We were asked to wait in their smart glass showroom until someone was free to see us. Well, Mickey was known for his clumsiness. In the centre of the room on a raised dais sat a magnificent specimen that had recently won an national award of some kind.  I heard a crash followed by an expletive and I turned to find Mickey crouched over a broken pot, scattered soil and lots of prize winning pink petals. We did not get a sale!
.
There wasn’t much of a party scene down there, so we came up with an idea which would get us invited to parties in other areas and even get paid to attend! And so our side-line, the ‘3748 Mobile Disco’ was born.
.
To be continued