Linked to Sunday Scribblings and Carry On Tuesday

Previously in A Chequered Career......

1971 was the year I said goodbye to my bachelor lifestyle and settled into a life of domesticity....... Tik Fasham reminded me that I was leaving one of the most respected sales forces in the UK having received training that was the envy of the profession just to sell domestic appliances.......... I attended a week-long residential training course in Miele’s glitzy state-of-the-art training facility in London. I was about to have the time of my life! 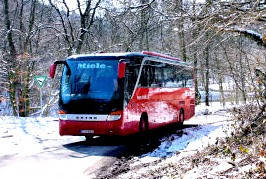 The registration number of my new car was LUC 949 K. Was that an omen? Probably, because it certainly was a fantastic job. As well as the normal task of keeping my retailers up to date with the latest developments, I also had the enviable task of taking a selected few to Germany once or twice a year to visit a couple of our seven  factories. We flew in chartered planes from Heathrow to Frankfurt where we were met by one of Miele’s incredibly luxurious coaches complete with a hostess plying us with bier and lebensmittel!  It was the visits to the manufacturing plants which made it a business trip rather than a taxable jolly for our customers! Unsurprisingly it was one long round of bierkellars, night clubs and sightseeing. The factory visits always took place the morning leaving the rest of the day free. Our visitors would sit on little trains which meandered around between various machines and assembly lines whilst they dozed off to a pre-recorded commentary via headsets. The highlight of the trip for us as hosts was always the visit to Miele’s foundry early on the morning of the last day when our clients were very usually somewhat hung over. Even with their ears covered, the steam hammers shook them to the core!  Their expressions were a treat to behold! I was however involved in one sad incident when a customer from Dorking failed to appear for breakfast one morning after a night out in Beilefeld. After banging on his door for some time without success we eventually broke into his room to find him perched on the toilet, dead to the world. The whole experience was evidently too much for him. The trips really should have come with a health warning! 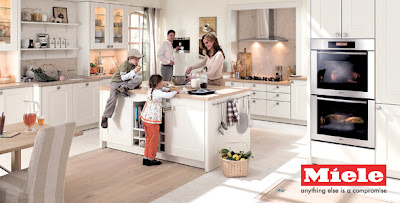 By 1973 Miele were producing all types of kitchen appliances including ovens and fridges, so it was only logical that they should start making fitted kitchen units too. I was asked to become a kitchen specialist with the job of visiting top-end kitchen retailers and persuading them to display our premium priced product. I worked out of a swanky showroom in west London, and whilst I was there one day, Bruce Forsyth appeared with his then wife, Anthea Redfurn. The next day I was at their mansion overlooking Virginia Water golf course tape measure in one hand and a glass of very acceptable Bordeaux in the other!

That was also the year our son Timothy was born.

Quite why we did it I don’t recall, but in 1976 Sarah and I bought a shop with living accommodation in the country village of Horam, known at the time for its Merrydown Cider plant and ever present vinegary smell. I was to continue with my job with Miele, whilst Sarah would run the shop. What we inherited was a rundown retail unit selling frumpy lady’s wear, not very successfully. It was the era of cheesecloth, and anyone who was anyone was wearing brightly coloured rustic-looking shirts, skirts and sarongs from India. We thought we would cash in. Every Sunday morning we would travel to the east end of London where the streets were lined with Jewish haberdashers and clothing importers. After much ringing of hands and haggling, our purchases were bundled into black sacks; no need for careful folding or clothes hangers with cheesecloth! We also contacted several local crafts people; potters, artists, woodworkers and the like and offered to market their work on a pay-when-sold basis thus keeping our stock costs to a minimum. And it worked. We later decided to put a few little wooden tables and chairs in the middle of the floor and serve coffee, homemade scones and cakes. That way, we were able to sell cheesecloth to people popping in for a coffee, and cheesecake to those dropping in to buy a skirt! 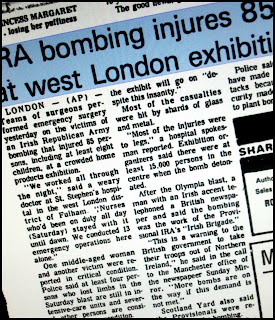 Saturday March 27th 1976 is a date that will always be etched on my mind. I was working on the Miele display stand at London’s famous Ideal Home Exhibition. That was the day the IRA planted a bomb in a litter bin on the crowded upper floor. I can still hear the dull thud from above me and see black smoke billowing down the staircase. Everyone rushed for the exit, me included; no time for orderly queues. In minutes, the street outside was filled with fire engines, ambulances, policemen, soldiers and walking wounded. Mercifully none of the 20,000 visitors present that day were killed, but 85 innocent folk were seriously injured.

And then I got itchy feet again! Something told me I was on the brink of finding a job which was even more satisfying. It was out there somewhere, but where? Everybody told me it was stupid to give up such a great job and in retrospect it probably was. But as they say, in youth we learn, in age we understand.