Written for Sunday Scribblings and Carry On Tuesday

It was New Year’s Eve at my pub. The party was in full swing and the customers, and some of my staff, were getting merrier by the minute!  Just an hour to go before the annual joining of hands and our slurred rendition of Auld Lang Syne! 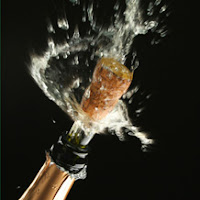 “Slate” shouted Tarquin. Now Tarquin Harper-Smythe was always the life and soul of the party: any party! However, seeing out the old and ushering in the new was the one time he really let his hair down, literally, as the ginger wig he wore invariably slipped to a jaunty angle half way through his second bottle of champers. “Slate” he yelled again! “Yes Tarquin” I said. “I know it’s late, but there’s still a bit of the old year to go!” He gave me a quizzical look, inserted his monocle and made a failed attempt at buttoning up his houndstooth jacket.

He unsteadily climbed onto a chair. “Revolution” he barked. “Slate” Then he started scribing wobbly circles in the air with a cloth. Anyway, we suggested that for his and our safety he get down. At first he was defiant, but eventually we persuaded him and we insisted he sat on the chair. He beckoned to me and pointed to my ear. I bent down. “Slate” he whispered spraying my cheek in the process. “I know it’s late” I said trying not to reveal my increasing exasperation. I took a tissue from my pocket and wiped my face much to the amusement of those around me. “Wipe.Clean” said Tarquin. “Yes I did, and now it is” I groaned. Tarquin looked intently at the table top and started wiping it with his cloth. He then took an imaginary writing implement from his waistcoat pocket and pretended to write. “Revolution” he mumbled.

As you know, my friend Rosey is usually the last person to realise what is going on in a confusing situation, but not on that occasion. “He’s telling us that it’s time to wipe the slate clean and make our resolutions” she chucked. Tarquin looked up and stabbed a finger in Rosey’s direction. “The gal’s right!” he chortled. “Sit here m’dear” he said with a glint in his eye, tapping his lap. Then, much to Rosey’s relief, he suddenly fell asleep, his head lolling back and his mouth gaping open! He slept right though the changing of the year and his man arrived with his car thirty minutes later.

We never did find out what he wanted to wipe from his slate, or what his resolutions were to be!