Written for Carry On Tuesday and Sunday Scribblings 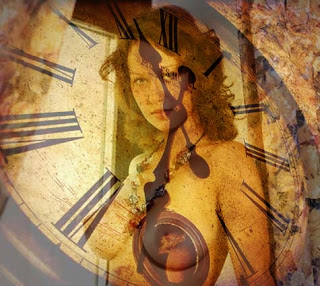 They were having a great time! Gemma had put on an incredible party for her three best friends; a fun-filled girl’s night in, with loud music, food to die for and a rainbow of cocktails. She was always such fun to be around with her witty banter, her bad taste jokes and even the occasional conjuring trick! The laughter was non-stop. “I don’t want tonight to end” shrieked Mandy. “Tomorrow is cancelled” chuckled Sara. “Stop all the clocks” yelled Julie ripping her watch from her wrist and dropping into her pina colada! “Great plan” said Gemma as she tottered over to the fireplace, grabbed the clock and tore out the batteries. The others cheered and raised their glasses, clattering them together and spraying their multi coloured contents all over the table. “All of the clocks” slurred Sara as she stabbed a finger this way and that. Gemma stumbled out of the room and stopped the clock in the kitchen. Then she tugged the plug of her bedside alarm from the wall. She rushed back to her friends and announced at the top of her voice that it would be eleven thirty for ever! With that she tripped over a plant pot and crashed onto the floor, smashing her head against the mantle shelf on the way down.She remembered hearing laughter but not much else.

The next morning she awoke with a start. Her head was throbbing. She had no recollection of the party ending. She looked at her bedside alarm. It was flashing on and off and on and off. Eleven thirty it said; eleven thirty, eleven thirty, eleven thirty. It couldn't be right. She crawled out of bed then stood unsteadily whilst the floor seemed to roll beneath her. With a bare foot she trod on something that sent a pain shooting up her leg. It was the upturned plug of the alarm. Why was it not in the wall? Why was the clock working? She slowly made her way to the kitchen and the sunlight streaming through the window blinded her. She waited for her eyes to adjust to the light, then poured a glass of water and downed it in one. The time - what’s the time she thought. The clock, where was it? She saw it laying face up on the worktop. A half past eleven it said. I’m late she thought. I’ve got an appointment– I’m sure I have; hair, nails... something. She walked towards her living room, one hand steadying her against the wall. The table was littered with plates of half eaten food, and cocktail glasses, some full some broken. Her rubber plant lay on its side and the clock was slewed sideways above the fireplace. She grabbed it and squinted at the hands. Half past eleven. She dropped it onto the sofa. With her head in her hands she massaged her temples with her fingers. The TV she thought, switch it on. The news channel. The picture was frozen. In the corner of the screen it said half past eleven. She glanced out of the window. It didn't look right. She saw several cars stationary in the middle of the road, and two pigeons perched on her fence, motionless. The trees stood still, and the wispy white clouds in the bright blue sky just hovered there. Mr Neil across the road was standing like a statue by his gate. She grabbed her cell phone from the table and punched the buttons. Nothing. The glowing screen just bore the numbers one, one, three, zero. Time was standing still.

Gemma walked to the front door and slowly pulled it open. The sudden noise was deafening, she pressed the palms of her hands hard against her ears. She stood there in her nightdress, not understanding what was happening. Cars rushed in both directions. A bus lumbered past. A child shot down the street on a pair of roller blades as the postman pushed envelopes through the letterbox of the house next door. “Anything for me?” she said in a half whisper. He seemed not to hear her, and trudged off to the house beyond.  Seemingly oblivious to the fact she was still in her nightwear and her feet were bare, she wandered down the path, out of her gate and onto the pavement. The wind sent a coke can rattling along the gutter and an empty sweet wrapper billowed past her face making her jump. She spotted her neighbour pulling up weeds from her garden. “Mrs James” she called. “Mrs James, can you tell me the time?” Mrs James carried on weeding. She walked up to an elderly man who was slowly making his way towards her with a little dog tugging at its lead, a bone between its teeth.“Excuse me” she said “Can you tell me the time? I need to know the time” He ignored her and carried on his way. She was at her wits end. Gemma looked over her shoulder and there, outside her house she saw Sara bending down and adding some flowers to a heap of a bouquets and balloons at her gate. “Sara” she called, a smile breaking out across her face. Sara started walking towards her – and carried on, walking through her. Everything around her started to swirl. She felt herself drifting upwards and floating above the street below. It seemed distant, surreal and alien.
*
Mandy, Sara and Julie were standing in the middle of a crowded room. Around the walls were pictures of Gemma; childhood photos, holiday snaps and happy times. Together, the three of them tapped their wine glasses and the room fell silent. Julie held a piece of paper in front of them and as one they started to read a poem.