Poor little Toby! In the ten short years of his life he’d endured one form of torture after another. But what he lacked in size he made up for in courage.
Toby was always the one to volunteer at school when some kind of challenge was thrown out to the class. When playing with his friends he jumped at the chance to take up a dare. He may have been quaking in his little size 4’s but he needed to prove that he was a bigger boy than his diminutive frame suggested.
When he was six he climbed a tree that his mates said was dangerous. He got half way up but then a man with a ladder had to rescue him. When he was seven he accepted a challenge to cross a field filled with cross looking sheep. He was scared stiff but he made a run for it. He ended up with a sore backside after a ram butted him.
When he was eight he sang a solo at the school concert. It was a silly song about helping Grandma in the vegetable garden. No one else wanted to sing it which was hardly surprising because the words went like this:-
‘I gotta carrot, I gotta yam, I gotta a green bean fresh not in a can.
I gotta potato, and as you can probably see,I also gotta pea.
I gotta pea, I gotta pea. Why is everyone laughing at me?
So if you find a little pea on the floor after I leave I think it probably belongs to me’
When he was nine he kissed Matilda Pargiter. Yuc! But in his tenth year he was to face a challenge that just about every child dreads! 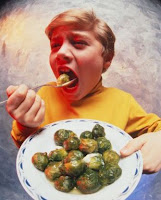 It was Christmas Day. His Mum had spent all morning in the kitchen slaving over a hot stove and the smells which filled the house made his tummy rumble with hunger. But he wanted the meal over as quickly as possible because until the table had been cleared and the pots and pans put away he couldn’t unwrap the special present his parents had put for him under the tree.
What stood between him and that taunting teasing gift backed parcel required him to summon up every bit of courage he could muster. He had to eat some brussel sprouts! It was a condition. His happy Christmas depended upon it.
He prodded one of those nasty vegetables with his fork. He slowly raised it to his mouth as his family looked on in silent anticipation. He opened his mouth then closed it again. He glanced over his shoulder at the package below the tree, then with his eyes screwed firmly shut he popped the nasty sprout into his mouth. He chewed it once. He bobbed up and down on his chair, chewed it a couple of times more then swallowed it almost whole. Then his eyes sprung open and he smiled a great big smile. He’d liked it! He really liked it! He liked sprouts!
He’s eleven now, and still small for his age. But Toby has one boast which he uses to put down his friends. He’d eaten sprouts on Christmas Day. Needless to say he didn’t admit he’d enjoyed them!

This week’s prompt at Carry On Tuesday awaits you! Just click HERE to join in the fun