Sunday Scribblings has come up with the single word Cheese this week. Mmm! 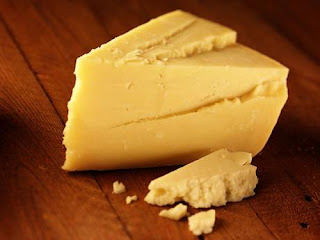 I was on the bus a few minutes ago and for the entire half-hour journey I had to endure the non-stop chatter of a couple of ladies sitting just behind me! ‘Well...’ I said, ‘so...’ she said, ‘then....’ I said, ‘and....’ she said.......” and so it went on mile after mile after mile!
Something they said reminded me about a recent visit to a cheese shop. The selection was sensational, the smell was intoxicating and the thought of tucking in made me dribble! A freshfaced young lady with pink cheeks and a toothy grim greeted me.
.
Hello she said, Hi I said. Cheese? she said, Please I said.
.
What’s this? I said. Brie she said. Looks tasty I said. It is she said. See this? she said. What’s that? I said. Stilton she said. Yum yum I said. Try some she said. Yes please I said.
.
The nice thing about this shop is that they insist you sample a bit before you buy. I never refuse!
'
Wow I said, that’s great I said. What this? I said Which one? she said, Oh that she said. It’s cheddar she said. Strong? I said, very she said.
Well, I tried a little bit and it was fantastic. When I bit it, it bit back! It was crumbly, creamy and made my mouth glow! The aftertaste lingered.
'
I’ll take some I said. How much? She said. That much I said. This much? She said. Perfect I said.
'
So, she cut it with a cheese wire, wrapped it in greaseproof paper, and took my money.
.
Thank you I said. Goodbye she said. Who’s next? she said.
Right now I’m tucking in to my wedge of cheese. I’ve got a chunk of warm crusty bread, some local butter, a couple of vine tomatoes and a dish of pickled onions. Oh, I also have a very acceptable bottle of ’06 Cab Sav breathing alongside. Fantastic!
.
.