One of this weeks promps on Matinee Muse is Against All Odds. Sunday Scribblings Forbidden follows.. 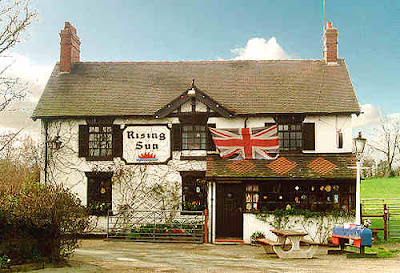 For centuries the Inn has been at the centre of rural and urban life in England. Its original purpose was to quench the thirsts of workers and to provide sustenance and refreshment to weary travellers. And so it does today. Against all odds it has remained virtually unchanged whilst all around has altered beyond recognition.

In the last census there were in the region of 57000 pubs in England. It is a sad fact however that currently our pubs are closing their doors at an alarming rate. This week another forty served their last pint. Forty did so last week, and forty will next week and in the weeks to come.

So what constitutes a typical public house? Most were built with three different serving areas. A public bar for the working classes, a small room with a serving hatch for ‘take outs’ and the saloon bar where the same drinks cost a little more, and furnishings were a little plusher to suit the needs of those further up the social scale. Many pubs also had a small anti-room known as the snug where ladies could sit and gossip! Today many pubs, particularly village ones, have retained the original layout, apart from the hatch, and prices are nowadays the same wherever you wish to imbibe. Now the typical public bar will feature a darts board, more often than not a television, and if room permits a bar billiards or a pool table. Games such as cribbage and dominos are played and the voices are a little louder and the language more flowery than in the other areas!


Today’s saloon bar is more often than not an eating area as well as somewhere a little quieter where the big issues of the day can be discussed in a more civilised atmosphere!

Deep in the ground, beneath the floorboards is the beer cellar. A sacred place where the ales and ciders sit and condition before being drawn up the bar by traditional cylinder and piston hand pumps. A place where the temperature remains constant and eerie spirits live! Nowadays they have been joined by brash new pressurised beers from the continent and beyond.

The pub business has had a lot thrown at it over the years. In 1830 the beer act came in which regulated the premises and the innkeepers. Soon after licences to serve alcohol came in, and a minimum age for drinking was introduced. In the 1960s drinking and driving laws meant that less people drove out into the country for a drink for fear of being breathalysed and banned. More recently the ban on smoking in public places dealt a blow to many drinking establishments. Successive governments have heaped on more and more taxes to make drinking out of the home an expensive pastime.

In future years there will be fewer pubs. A lot fewer in fact, but as with all things the fittest will survive – against all odds!

Top picture - The Tiger Inn c.1480 in the downland village of East Dean
Bottom - Me with my daughter Penelope at our pub, the Brewers Arms c.1750 (the pub not the picture!)