Not every holiday lives up to its expectations. But my holiday in Mallorca did. I might even say that it went beyond my hopes and dreams.

Arriving at the Flacalco Hotel very early in the morning meant that I had a whole day to familiarise myself with Calla Ratjada and generally get my bearings.
So after checking into my basic but completely satisfactory room, I set off to explore. I got hopelessly lost! It’s not that it’s a big place, it’s just that the streets didn’t seem to go where I expected them to! One moment I was facing the sea, and then after turning around and walking away, lo and behold I was facing the sea again! And that was before I’d had a drink! Turned out that the resort sticks out into the Mediterranean like a finger and has water on three sides! Having solved that mystery I decided to check out the best bars. 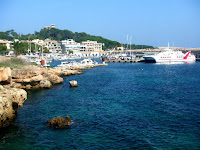 My days followed more or less the same pattern. Get up, go down to breakfast, wander out to the pool and read! And read and read! Now this type of holiday is new to me. I usually spend my days dashing here and rushing there. But this time I was determined to slow down. Stop. 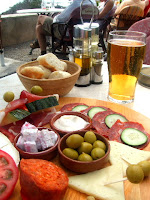 About mid day I’d head off in search of lunch. Usually a selection of 5 or 6 tapas dishes with a litre of San Miguel. Or sometimes a bulging baguette stuffed with Palma ham and locally grown succulent tomatoes washed down with a carafe of Rioja.

I’d often perch on the rocks with the sea lapping at my feet and disappear into the pages of my book, then wander to an ice cream parlour for an extravagant multicoloured frozen treat!
But I couldn’t come this far without seeing at least some of the island. An island steeped in history with so much more to offer than sand sea and sangria. 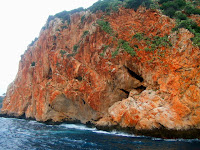 The cliffs between the resorts are tall and stunningly beautiful. They rise from the sea in a palette of yellows greens and orange. Caves penetrate deep inside them and seabirds fly in and out, and then swoop beneath the waves to emerge with fish in beak.

I took a trip on a catamaran which rushed up and down the east coast popping in and out of all the ports along the way. From there I was able to observe the ever changing landscape, and watch the trawlers going about their business hauling in nets of flashing silver fish.

One day as I was walking aimlessly along the promenade, I caught the sound of jazz coming from a bar. Noah’s Bar. I had to stop. It was a song from the Sound of Music but Julie Andrews it wasn’t! No, I was listening to a breathy deep voice singing ever so slowly, accompanied by a lilting piano and a sensual double base. It was totally captivating. I stopped for a beer. The music got more and more spellbinding. I stopped for another beer. Noah’s became my favourite place. I place where I could close my eyes and drift away to a peaceful place within my mind.

Palma is the main town. A city. The sweeping Bay of Palma plays host to cruise ships the size of tower blocks, and to the massive floating gin palaces of the rich and famous. The skyline is dominated by a magnificent cathedral behind which is a maze of narrow streets filled with artist’s studios, craft shops and intimate cafes.
Every now and then you come across an opening to a courtyard filled with graceful trees, statues and clouds of purple bougainvillea. 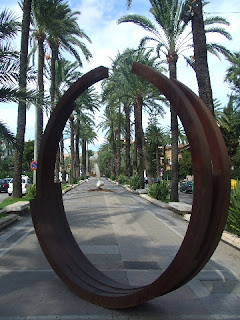 In the new part of the town wide pavements carry you past statues and artistic creations whilst overhead palm trees meet to form a swaying nave.

Palma is vibrant, cultured and modern. Palma is ancient, emotive and stimulating. 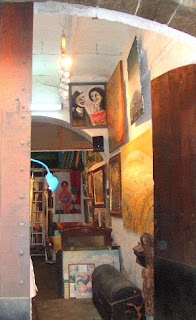 One afternoon I was sitting outside a bar in Calla Ratjada people watching. I was suddenly aware of the German’s liking for tee shirts displaying messages in English. It became apparent that in many cases the wearer must have been totally unaware of the message they were conveying. One teenage boy thought it was cool to claim he was ‘Little Miss Sunshine’. A somewhat oversized person of indeterminate sex bore the legend ‘Cash and Carry’.
Then soon after, a large pair of breasts loomed into view followed by the remainder of a particularly generously proportioned Frau. On her shirt was an image of a cartoon cat above the words ’Have You Seen My Pussy’ 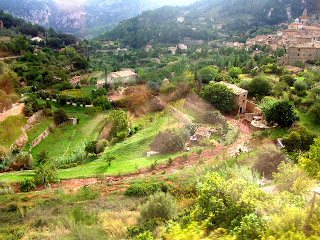 I took a trip up into the mountains. The narrow winding road took me higher and higher. The mountains are rich in pockets of fertile soil, and terraced beds are filled with water melons and salad vegetables. Trees cling on to near vertical rocks and goats find grass where they can. My journey took me up to the old town of Valdemossa.

This ancient town is dominated by an old monastery. A complete village within a town. Rooms lead off in every direction. An apothecary on one side, and library on another. Chapels and studies. Studios and cells. It’s best known inmate was Frederick Chopin who wrote many of his best known works within those walls. Around the main building are wonderful formal gardens and awe inspiring views across deep valleys and gorges to the sea beyond.

Unfortunately the Monastery and the town itself have been mercilessly commercialised. In Chopin’s studio I was offered gaudy plastic pianos and in the library, imitation plaster books. The streets of the town are filled with souvenir shops peddling cheap tacky ornaments and totally inappropriate merchandise.

This town owes its fame to Chopin. Sadly it was apparent that most visitors are more impressed by the fact that Michael Douglas and Kathleen Zeta Jones have a villa there. 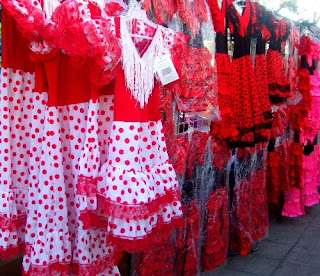 Saturday is market day in Calla Ratjada. The vast open town square was suddenly filled with stalls groaning under the weight of local fruit and vegetables. Linen stalls next to jewellers, and displays of brightly coloured Spanish dresses and dancing shoes alongside pyramids of honey. 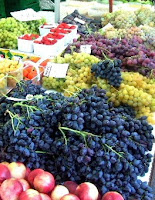 Suddenly the local folk appeared to have come out of hiding, and the guttural sound of the German language was suddenly replaced by the rat-a-tat of Spanish.
On my last day, a Sunday, I wandered into a church and stood at the back while mass was celebrated. The whole place had an air of calm and coolness about it. The service was being conducted in German of course, but nonetheless it gave me a chance to stand back from the hustle and bustle of the streets outside. 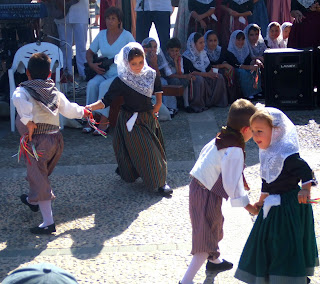 I left the church and wandered down to the square where a display of Spanish country dancing was taking place. The pure joy in the faces of the young dancers was truly uplifting as they swirled, skipped and swung each other around in the afternoon sun.
How does one sum up Mallorca? Well, underneath its sometimes brash exterior, there is place of genuine beauty and tranquillity. A place which basks in the warm sun and begs you to relax. I saw some graffiti scrawled onto a huge black silhouette of a bull beside the road. Someone had painted ‘Mallorca is not Spain‘. Whatever political point the scribe was making, the message rang true. No doubt if you were to explore deeper into the villages and towns which are off the tourist trail, you may just come across the Spanish island of Mallorca that once existed. But the average visitor might be in any of the Mediterranean holiday destinations.

Certainly, the only time you are aware of a local population is when you pass a backstreet bar, or at mid afternoon when crocodiles of brightly clothed children wind their way home from school towing their schoolbags behind them on little trolleys.


But for all that, Mallorca is an ideal place to relax and unwind. A place where time seems not to matter. A place I may well go back to.
to see 34 more photos click here http://keithsimages.blogspot.com/2007/10/island-of-mallorca.html