When I write about my travels, I tend to get carried away! I often manage 3000 words which is quite a challenge for my readers! So this time I've broken it into 3 parts which will at least give you a chance to grab a cup of tea or a beer between sections to keep you going! So here goes! 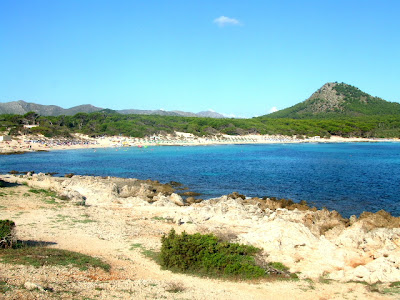 > The beautiful island of Mallorca has a bad image. British pubs abound, full English breakfast starts the day, and you’d be forgiven for thinking that fish and chips, or bangers and mash, are the only food on offer.

Think of Mallorca and the image is of stag and hen parties, Club 18/30 and drunken youths throwing up in the gutter. Discos, cheap booze and deafening music.
And it’s true to say that is pretty much how it is - particularly in the southern resorts such as Magalluf.
But there is another side to Mallorca. Mountains, forests, remote sandy coves and laid back resorts. I felt I had found a base for my visit which ticked all those boxes.
Calla Ratjada is a small town on the eastern side of the island. Whilst it could never be described as beautiful it does have a simple charm.
The waterfront is dominated by craggy rocks and a deep harbour where pleasure craft share the space with fishing boats and gleaming yachts.
The main beach is about 600 metres from the town and reached by walking into a pine forest until a cove of glistening sand appears. In front a sea of deepest blue, and behind, the mountains tower above the trees and reach for a cloudless sky.

The restaurants and bars which link arms along the front play gentle music. Here you are more likely to hear jazz and Abba than dance anthems and rock. 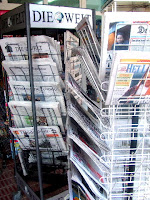 Outside there menus are displayed on blackboards - Tapas, Paella and freshly caught local fish.
On most of the island such menus are written in Spanish and English. But here it’s different. Here the second language is German. Calla Ratjada exists for the thousands of German tourists that come here year after year. Whereas the newspapers for sale on most of the island are dominated by The Sun and the Daily Mail, here the racks bulge with copies of Dei Welt.
I had found the perfect place for week of relaxation. And relax I did!
To see all my photos of Mallorca click here
'
'