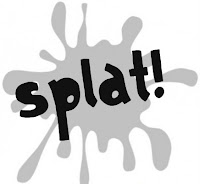 ‘It gone mistaire, it gone’ he shouted so I asked him what had gone and he said ‘Carrot... fluid.’

I asked if he’d lost his carrot juice and he said ‘No mistaire. Cadge it open, carrot fluid away’.

My befuddled expression told him he was failing to communicate so he had a go at role play by flapping his arms and squawking ‘bastante polly, bastante polly!’

My limited knowledge of Italian told me that bastante meant pretty, and polly meant..well, polly - pretty polly, so his carrot was a parrot, the cadge was a cage and the bird fluid… I mean flew away!

He suddenly pointed skyward so I diverted my gaze in the direction of his digit to see a parrot rapidly descending but unfortunately, it chose that moment to excrete some poop which splattered on my cheek.

‘Bastante Polly’ it shrieked; bastante wasn’t the B word I was thinking!

The cue at this week's Six Sentence Stories is Fluid