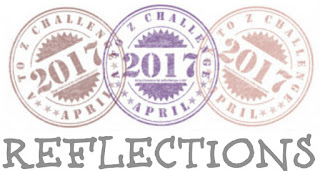 Greetings from Amble Bay. It has been very quiet here since you left.  You were a pretty noisy bunch! Life goes on pretty well as normal, but without Arthur, it’s just not the same.

I took a gamble using the village as my theme for the challenge. Having revealed it at the end of last year's Reflections, I had no choice but to go ahead despite the doubts that crept into my mind.

Happily, my doubts were unfounded and in my wildest dreams, I could never have foreseen the positive reaction my tales were to receive, and for that, I thank you from the bottom of my empty beer glass (hint!)

A thought. Once again I  found the Challenge overpopulated by experts lecturing us on how to write. I think the secret of success is to be different; don’t conform, don’t follow rules.

Another thought (the last I promise!) I preferred the old-style list rather than having to post a link each day. Right, that's off my chest!

Finally,  thanks to all of you for keeping me amused and informed through your posts during April. Let’s not be strangers!

Must dash to the letterbox or I'll miss Pete the Postie collecting the mail.