Written for Three Word Wednesday where the given words are jockey, lopsided and kindred.

Something said no, but I had to take the risk.

Along the road, up the hill, round the bend. Over the bridge, through the gate, and across the park. Past the pub, by the church, and into the mall.

I stride into the betting shop, chest puffed out and with a confident air, approach the counter.

“Everything I have on Nellie the Nag in the nine-nineteen at Newmarket,” I say pushing my cash across the counter.

Everyone in the shop hears me and assume I know something they don't. A queue forms, and one by one the gamblers stake some money on Nellie. The bookie's eyes light up. Nellie is a rank outsider with odds of ninety-nine to nine. 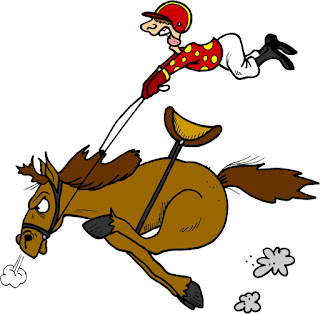 The race is about to start. I sit down and fix my gaze on the TV screen. They're off!

Out of the stalls, down the straight, round the curve, jump the hedge.

Nellie is last, dropping behind and looking tired. The jockey is perched lopsidedly on his saddle. Oh dear. I cover my eyes.

Then shouting and cheering. I part my fingers, peer at the screen and Nellie the Nag is coming up the outside. Three fences to jump before the home straight and victory.

Clear over one, scraped over two and high over three.

I'm on the edge of my seat, bouncing up and down in time with her galloping. Kindred spirits yell “Nellie, Nellie, Nellie” Then everything becomes a blur.

The race is over. The silence is deafening.  Nellie hasn’t  made it. I've lost and so has everyone else. Someone asks the bookie how much I'd bet. “Everything he had” he replies. I stuff my hands in my pockets and with head bowed I walk out of the shop.

Out of the mall, by the church and past the pub. Across the park, through the gate, and over the bridge. Round the bend, down the hill and along the road.

Thank goodness I only had two pounds on me when I put it all on Nellie the Nag.