The twelve given words at this week’s Sunday Whirligig are slip, well, grief, turning, place, breathe, source, glimmering, coins, thrown, something and still.

Good grief, what ‘appened ‘ere then? asked a red-faced PC Creasey. He was out of breath and suffering from a severe case of stitch after running from the village.

‘I'm er, well thanks’ he puffed grabbing the peak of his helmet and straightening it.

Dave turned, pointed to the river and said nothing.

‘Oh yea’ said Creasey ‘Daisy Duck’s ‘ad chics’. Daisy quacked ‘hello’ whilst her little ones swam frantically in her wake as she pointlessly paddled round in circles.

‘Creasey!’ bellowed Forensics Freda.  ‘We’ve got a corpse down here!’

‘His lips are blue' said Creasey. My daughter's got some blue lipstick. Looks stoopid on 'er if you ask me’.

Freda ignored him. ‘Question is, did John Doe slip into the water or was he thrown?’

‘Oh, we’ve got a name then’ said Creasey.

‘No! That’s what we call unidentif.....oh forget it.’ shrieked Freda her voice become more shrill by the word. She slowly drew breath and composed herself. ‘We are still trying to identify him’. She pulled something from his pocket; a  piece of soggy paper, then a few coins. She photographed the pink ribbon around his wrist and the nasty red singe on his cheek. ‘None of this makes sense’ she said. 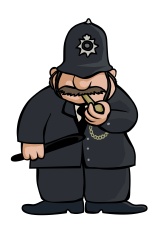 ‘Ahem’ said Creasey. Freda looked up and saw a glimmer in his eyes. Perhaps he had something useful to add.

‘I’ve got to go back my place’ he said. ‘Mary's makin' a beef pudd'n for lunch and I promised I wouldn't be late’. With that PC Creasey plodded off.