My imagination took a strange route when I perused this week's words at The Sunday Whirl! Join me do. 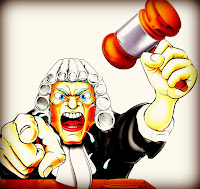 ‘Order’ yelled the red-faced judge as he slammed down his gavel and sprung to his feet. ‘Order’. His wig slipped forward covering one of his bulging eyes.

‘You are all dismissed from my court’ he shouted as his wig dropped onto the floor. The court officers tried in vain to pilot the unruly mob from the room.

At this point dear reader, I should explain that the court was convened to deliberate and form a judgement in the matter of the claimed unlawful killing of a local and well-respected chef. The poor soul stood accused of the dastardly deed was considered by most to have been unfairly blamed and therefore completely innocent of any wrongdoing.

With a crash, the huge oak door flew open and slammed against the wall. There in the entrance stood the one supposedly murdered.

To cut a long and possibly tedious account of what followed short, the revenant explained that he had died as a result of a self-imposed and unfortunate accident involving a knife, a joint of beef, a spiky carving board, oversampling the red wine jus and a splodge of grease on the floor. He went on to say that that hapless soul who was considered culpable in  carrying out the crime had in fact been, in his words, ‘shafted’ and was actually completely innocent of any misdeeds. With that, he said ‘Must fly, bye-zee-bye’ and shimmered out of sight.


Make of that what you will!