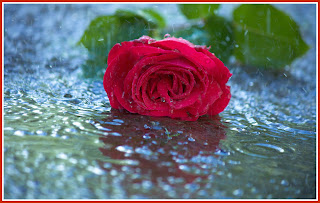 Look,  someone has left a rose. She loved roses.

She was never one to drink much, so when she left  the bar late that night I thought perhaps I should follow her. But instead, I stood and watched as she walked towards the bridge. I somehow knew what she was about to do and I felt this was one decision she should make for herself. I didn’t try to stop her. After all, her life had been one spell of misery after another; endless years of being told what and what not to do.

They never found her. They assumed she was swept down river and into the ocean.

***
Okay, that was the official line. Want the truth?

On that life-changing night, she did indeed stand on the bridge. She held  on tight to the railing until a bus approached filled with witnesses. Then she jumped. I was waiting right  below in a little boat positioned as close as I could to where she was to fall into the fast flowing water.

I’m not going to tell you where she is now. After all,  she was supposed to have taken her own life. Suffice to say, she has a new life and a new identity.

But you didn’t hear it from me.