This piece for Sunday Scribblings 2 is a little longer than normal at around 500 words, but now and  again it's nice to break free of my shackles and romp away! This week's one-word prompt is Artist.


‘Here comes the bus girls’ shouts Rupert. ‘Come on Gladys, get a wriggle on, we haven’t got all day’. Actually they do have all day. They have nothing else to do.

It’s a midsummer’s morning and the sun is spreading a golden glow over everything it surveys. A perfect day for a bit of art! 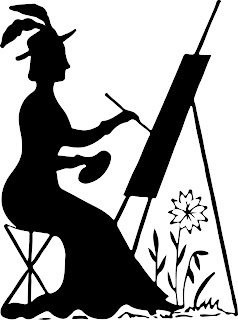 The Shufflewick Village Art Club used to have ten, maybe twelve members. They were all ‘of an age’. One by one they dropped out through ill health, failing eyesight or the onset of lethargy. Others simply took their place in the celestial  art studio in the sky. With no new members signing up, only four remained.

They clatter onto the bus struggling with their easels, folded stools, blank canvasses and copious canvas bags bulging with tubes of paint, brushes and a packed lunch.

An hour or so later they are sitting in a row, brushes poised, looking out at a field of swaying grass and a couple of curios chewing cows staring back.

Muriel flips up the tinted sun lenses on her spectacles, shades her eyes with her hand and stares intently at the pastoral scene.

June slowly raises herself up in a series of jerks then holds a wooden stick at arm’s length horizontally at first then vertically. She once saw an artist do it on television. She was not sure why but she felt it gave her an air of superiority.

Gladys has already started. She frantically scribbles some pencil outlines, takes a few steps back, cocks her head on one side then nods in approval. Then it’s off with the caps on her paints and with a series of farts from the tubes dispenses little piles of greens reds and blues on her technicolour wooden palette. Her hand is a blur and a picture takes shape.

Rupert has changed the colour of his canvas from white to a pale green. He always starts this way. Waiting for it to dry gives him an excuse to pour a coffee from his Thermos flask which he tops with a generous slug of Martell brandy from his silver hip flask.

Muriel is now painting. She moves her brush slowly and precisely, her nose is just inches away from the emerging image. It is uncannily true to life, and almost like watching a photograph develop before your very eyes.

Three hours later Rupert is walking back and forth casting a critical eye over the four completed works of art. He strokes his chin, scratches his head and makes little grunting sounds. Gladys, having ended her artistic endeavour is now sitting in the shade of a tree nibbling on cucumber sandwiches.  June appears to have dozed off, although she always insists she’s just resting her weary eyes. Gladys has gone in search of a friendly bush behind which she will ...well, you know..

Four painting all different. Rupert’s is  pale and whimsical, and Junes is, well, unfinished. Gladys’s is a riot of colour and Muriel’s too perfect for words.

It’s time to pack their bags, fold their easels and stools, and carefully carry their drying paintings in the direction of the bus stop.

And so another meeting of the Shufflewick Village Art Club comes to an end. Next month, they’ll be lining line up outside the Jolly Farmer and attempting to immortalise the history and mystery of this ancient building in swirls of multi-coloured paint.

Hopefully, all four will be present.