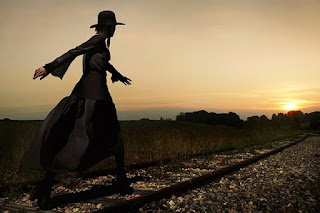 I've based my tale on the first thought that came into my mind when I saw the picture. I hope I've not been too hasty!

She had a one track mind. Obsessed with thoughts of revenge, inhabited by hate and the need to destroy that which had almost destroyed her.

She blindly followed whichever merciless idea was the first to enter her head, with no thought as to where it might lead, or the consequences that might ensue.

But he was always one stop further down the line. To him, the chase was a challenge. As she plotted, he relished the hunt like a wise old fox dodging the blood hungry hounds.

And whilst she headed for the sunset he enjoyed the dawn, for he was starting anew. A new conquest tempted by his alluring words on a dating site.

At least, so he thought.

But she had reached her final destination. This part of her plan had worked and at last she stood face to face with her tormentor. Now it was she that had the upper hand.

The chase was over. She claimed her prize then skillfully disposed of it like so much garbage. She felt no guilt, no remorse, only satisfaction..

At last her mind was free to travel any track it desired.