Written for this week's Three Word Wednesday where the words are Desire, Wilt and Shiver

A few of us met at the Bicycle Arms the other night at my friend Rosey’s behest. She said she wanted to discuss an idea with us. That was it; no advance warning of what was to come. 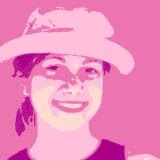 There we, were, five of us seated around a table in eager anticipation. In sashayed Rosey. But this was a different Rosey from the one we know and love. This version of Rosey was adorned in a bright red satin dress and wearing heavy makeup (she doesn't normally wear any) featuring the brightest red lips I think I’ve ever seen. In one hand she held an A4 writing pad and in the other beautiful red rose. She sat herself down and plonked the rose in my pint of beer! What the heck was going on?

She then turned  towards the bar and clicked her fingers. At least she tried to, but didn't manage to produce any sound and gave up after a few attempts and yelled “Oy” instead!

Barman Brian came trotting across to us carrying a bottle of champagne (which turned out to be cheap Cava) and six of those old fashioned champagne glasses; you know the ones, they were said to have been modeled on the breast of Marie Antoinette. Rosey said they best suited the subject we were about to discuss. We couldn't imagine what was coming next.

Well, it turns out that she’s just finished reading 50 Shades of Grey and it’s made her think about starting to write again. She reckons she can produce a rival tome called 50 Sirens in Scarlet. No doubt E.L.James is quaking in her boots! She brought with her a chapter and asked us say what we thought of it. Oh dear!

She swallowed a whole glass of bubbly in one gulp, then after coughing, spluttering and wiping her crimson clad bosoms with a napkin, her reading began.

“No clouds that night then” Rob said.

“Shut up Rob and listen. As I was saying, all around us our garments were         strewn like so many autumn leaves”

“Blimey Rosey, had he even taken his socks off?” chortled Simon.

Rosey stared and having been silently admonished Simon slipped down in his chair. After a theatrical silence she was off again.

“I was overcome with desire and as he looked into my eyes I saw him shiver with .....”

“With what Rosey, the cold? Perhaps he should have kept his socks on!” said Rob. If looks could kill he’d have been a corpse.

“With longing Rob, with longing, now SHUT UP!” Silence and serious faces all round.

Then still looking towards him she started again.

“I didn’t expect it to wilt" she said.

I noticed Heather blushing and looking at the floor as if wishing it would open up.

“Rosey, you can’t say that in polite company! It’s too rude” I said.

"Why not?” said Rosey. “It has, my red rose has wilted. Your rotten beer has killed it”.

After a quick discussion it was decided she should email those of that were still interested with the rest of the chapter. We gave up on the Cava.  Rosey bought me a new beer and herself a glass of Chardonnay, and for the rest of the evening it was business as usual.