Linked to Carry On Tuesday and Sunday Scribblings

Previously in A Chequered Career
In one day I had gone from the relaxed style of Hughie Holmes to the military regime of Tik Fasham…………. . “As safe as a letter in a letter box Mister Hillman” Tik would say. “What is it young man?” “Safe as a letter in a letter box Mr Fasham sir” I’d reply……. Meanwhile my social life was getting better by the day. The flat below was occupied by an up and coming rock band called Giles Giles and Fripp. The thing I most remember about their flat was a portrait of the Queen framed in a toilet seat which hung above the fireplace! ………..And so it was that we left London behind and rented a very grand house in the lovely town of East Grinstead……………..And our side-line, the ‘3748 Mobile Disco’ was born.

CHAPTER 5 - STANDING AT THE CROSSROADS 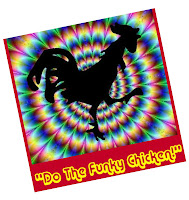 I got hold of a couple of Garrard SP25 record decks, an amplifier, a microphone and some bits of wood, and then built us a console. We couldn’t come up with a name that we agreed on, so we used part of our phone number, East Grinstead 3748. We didn’t exactly earn a fortune from it, but we had fun. We dug our funky stuff everywhere from a Brighton nurses home to Shoreham Yaught club! I still remember our excitement when we got an early copy of the first ever UK seven inch single in made in stereo, Pinball Wizard by the Who. Mobile discos were something new back then. We played records all the way through and exactly as recorded rather than chopping, slurring and mixing them the way so-called DJ’s do today. I can still see myself in a room full of partygoers singing Hi Ho Silver Lining at the top of their voices, doin' the Funky Chicken and smooching to Love to Love you Baby!
It was 1970, and my company car was due for replacement. I was offered one of those horrid little Austin 1100’s. It was not for me so I joined a scheme whereby the firm paid me to run my own car. I set out to find the cheapest new car I could and I ended up with a Citroen Diane, a quirky little vehicle with a two cylinder air cooled engine and a roof which completely rolled back. Often on our trip back from the White Hart, Mike and Bernie would stand to attention on the rear seats, exposed to the elements like a couple of Romans riding a chariot! 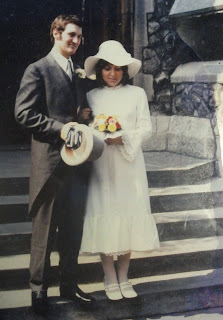 By 1971 I had been with Lamson Paragon for six years making it the longest period I’ve ever had in a single job! It was also the year I married Sarah and I said goodbye to my bachelor lifestyle. We were wed in a church in Hampstead, North London. My school friend Roger was my best man and he even composed and played a piece of organ music for the entry of my bride.  My work friends were my guests of honour and Bernie wore his clan’s tartan kilt! We moved straight into a brand new house back in the small town I grew up in, Hailsham. It was a different town from the one I’d left. The estate on which we lived had been built on a field in which I played in as a child. The railway line which once linked us to the towns beyond had fallen foul of Lord Beeching’s axe, and saddest of all, the Home and Colonial stores had closed down having been beaten into submission by a new self service superstore, Key Market,  built on what used to be an open space in the centre of the town. I settled into a life of domesticity, my only concession to the fun times being the purchase of a sports car, a Sunbeam Alpine soft top. It was then I found myself standing at a crossroads. Something else had to change and my instinct told me a new job was what I needed.
Lamson Paragon Ltd was justifiably proud of its sales force. They were looked upon as highly trained true professionals, and with computers on the horizon, the market for continuous stationary was set to soar. I knew that if I was to announce to my company that I fancied a go at marketing consumer goods, I would be looked down on as if I was selling myself short. However I applied successfully for a job with the best company I could find, the mighty Miele of Germany (to this day Miele produce the finest, and by far the most expensive domestic appliances in Europe)

Normally when a colleague left he was given an exit interview by someone from the personnel department and sent on his way. I however was summoned to head office for a meeting with the Managing Director, ECMB. I was ushered into his vast office only to find Tik Fasham sitting by his side. I received no greeting. After a short silence which seemed like an eternity, he spoke. “Washing machines?” ECMB lisped. “Yes sir” I muttered looking down into my lap like a schoolboy who’d been caught smoking behind the bike sheds. Another interminable silence. I slowly looked up and ECMB was red in the face; I thought he was about to explode! “Bloody German washing machines?” he sprayed. “Yes sir, and German dishwashers too” I mumbled biting my lip and wishing I hadn’t just said that.  Whilst ECMB mopped his brow, Mr Fasham took over. He went to great lengths, very quietly and very slowly, to remind me that I was leaving one of the most respected sales forces in the UK having received training that was the envy of the profession just to sell (he looked down his nose) ‘do-mestic appliances, white goods. A few minutes later, suitably chastened I walked out of the wood panelled office, out of the magnificent building and into a new chapter of my chequered career.
After working out my notice, I attended a week-long residential training course in Miele’s glitzy state-of-the-art training facility in London. I learned all I needed to know about my amazing products and was left in no doubt at all that I had made the right move. At the end of the week I was given everything I needed to look after my customers and to find new ones, including a brand new VW estate car in a fetching shade of baby blue! I was about to have the time of my life!