CHAPTER ONE - MY FIRST PROPER JOB

“Better out than in” Ray would roar as the seat of his pants rippled to the accompaniment of a deep rumbling from within. It's strange, the things you most associate with certain times in your life. Ray was my first boss. I had left school at the first opportunity having never been adept at things academic, and on my first day of freedom I set off down the local High Street shop by shop, until I found someone willing to give me my first taste of the world of work.

So a few days later, dressed in a calf-length crisp white apron, I was ready to face the customers of the local branch of the Home and Colonial Stores, a pre-supermarket proper grocer's shop!

Ray was a portly chap who stood over six feet tall. His nose was a deep red and his flushed cheeks were patterned with purple veins. Being a manager, he wore a tie, the knot of which was hidden by several of his wobbling chins. He ran Branch 278 with military precision, aided by his devoted wife Gladys and a skinny teenager called Roger. Glad as she was called, was a short and almost spherical lady, who somehow got away with sporting a floral apron rather than the standard white issue. She had a permanent smile on her chubby face and spent every spare moment gazing adoringly at her husband. Roger was devoid of personality, but determined to go far and made no secret of the fact that he saw himself as Ray’s successor.

In those days tills didn’t add up for us. We stood behind a glass fronted counter over which ladies would recite their shopping lists, and as we assembled their items we kept a running total of the bill in our heads; those were the days before decimalisation when we had twelve pennies to the shilling and twenty shillings to the pound!  Most of our regulars paid a couple of bob into their Christmas Club fund before settling up their bill, and a note of their payments were written in a book which only Ray had access to. Somehow, there was always quite a bit of money left in the book after Christmas which he shared amongst us. I never asked how it happened.

Ray was an excellent teacher and went to great trouble to illuminate the art of the grocer. In no time at all I was able to take a whole side of bacon, half a cured pig that is, and remove the bones before converting it into rashers, steaks and joints. I learned how to ‘cook off’ the gammons and carve the boiled ham off the bone as my customer looked on. Cheddar cheese was produced in half-hundredweight cylinders back then. I was taught how to prepare it by firstly removing its waxed cloth skin which often bulged balloon like with a pungent gas. I would stab it with a sharp knife then run for cover! Once it had settled down and the stink had subsided I would start to slice the monster into manageable portions using a length of wire with a wooden handle at each end. Sugar arrived in sacks and I had to scoop it into blue paper bags which I also did with dried fruit for cake making and the Home and Colonial's famous tea. Butter arrived in large yellow blocks which I had to cut up and pat into shape with wooden paddles. I had a bit of a flair for setting out the window display, and once each month I received a photograph from head office which gave me an idea how the finished presentation should look. I’d stack cans and jars and boxes, and adorn them with colourful cards which tempted our customers with offers they could hardly resist.

Ray had a hobby. He went sea angling once a week in his little lop-sided motor boat off Eastbourne beach. I went with him a couple of times. He’d load up the craft with bottles of beer and doorstep sandwiches, and spend the day anchored to the seabed, bobbing about just off the seafront and occasionally hauling in a fish or two. These days were special to him; the sea was his sanctuary; a haven of tranquility away from the daily routine where he could doze off and it didn't matter. He always said that life was too short to work so hard.

One regular visitor to our shop was a sales representative or a ‘traveler’ as they were then known, from Spillers the now defunct flour millers and pet food manufacturers. I always envied him. Barry was his name. His suit was sharp, his shirt and tie immaculate and his shoes glossy black.  He would swagger through the door, a brief case in one hand and a couple of free samples in the other. But best of all, he had a shiny company car which he parked in the street outside. It was a mint green Ford Anglia. I made up my mind that one day I would be a traveler too, and a couple of years later my dream came true; well almost! I'll tell you about that on another occasion.

But as I said at the beginning, it’s often the oddest things which first jump into your memory when thinking back to times gone by, and when my mind wanders back to the Home and Colonial Stores, I think not of bacon and cheese and tin cans, but of Ray’s flatulence!  “I treated Glad to a Dutch oven last night” he often chuckled. It seems that just as Glad was falling asleep, he would pull the bedclothes over her head and let one go! She always took it in good stead, just shaking her head as he told us, and tut-tutting with a broad grin on her face. The shop has gone the way of all such grocers now; soon after I left, a supermarket rose from a green field nearby and that was that. I wonder where Ray and Glad are now?  Happy times! 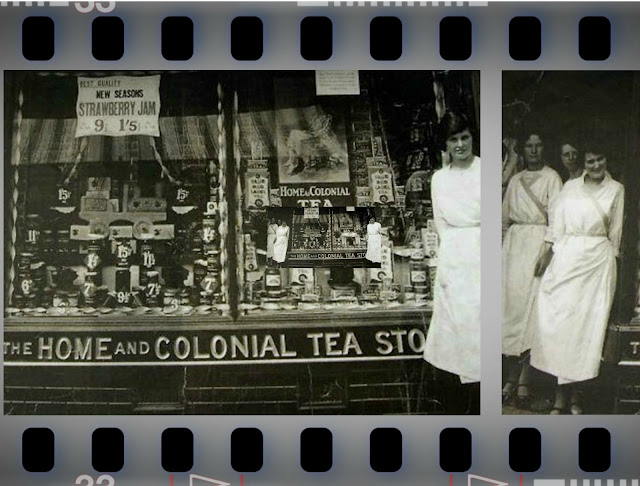 Go to next chapter