Previously in A Chequered Career

I was a simple country lad brought up in a market town surrounded by open countryside……then I found myself standing, dazed in a huge railway station where people dashed this way and that like so many frantic ants…… a skinny man in his fifties appeared wearing a shabby baggy brown suit, shiny at the knees and elbows. A grey nicotine stained moustache adorned his thin top lip….Hughie Holmes was to aid and instruct me in the world of personalised business forms.

CHAPTER THREE  - THE YEARS THAT CHANGED MY LIFE 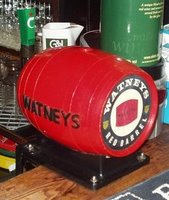 I had never really tried real beer before meeting Hughie Holmes. Back then fizzy ice-cold lager was the in drink: Skol, Carlsberg and the like. But before my first week at Lamson Paragon was out, I was converted to Watney’s Red Barrel and Tennant’s Gold Label. During that week my mornings consisted of Hughie introducing me to existing customers who would always greet him with a huge smile and a warm shake of the hand. He was certainly popular with our clients. Then each lunchtime we would burst through the door of a different hostelry, where the welcome by staff and customers alike was equally warm. At five PM I would go home. I was in awe of him. He was a superb salesman, an edifying tutor witty bar-room entertainer all rolled into one! Week two saw me launched alone into my territory, North West London postal districts, where I serviced my customers and sought out new ones. I took to it like a duck to water, and soon the commission began to roll in. I bought myself an ancient Austin A30 which I hoped would keep me motoring until I earned my company car. Hughie accompanied me on my rounds, and to a pub,  once a week; my favourite day. At weekends I travelled back home to Hailsham where I regaled my friends and family with tales of the big city. 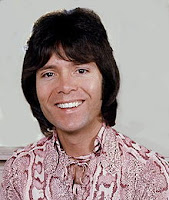 From the window of my little room in my digs, I could see St Pauls Church. Sometimes when alone, I’d mutter “Thank you God” in the hope that should he exist, he would continue to help me on my way. At that time my theological stance was slightly to the right of agnostic, so that August I thought I would hedge my bets and try to earn a few extra spiritual points by offering my services at the church youth club.When I entered the church hall on my first evening I felt sure I recognised one of the other helpers. I mentioned it to the vicar and he said I certainly should, for he was none other than the chart topping rock ‘n roller Cliff Richard! That was the year he had ‘come out’ as a devout Christian and toned down his former rebel rousing stage performances. A few months later I was invited to the confirmation service of one Harry Webb, Cliff’s real name. He was the first of literally scores of famous people I would meet during my working life including our Monarch! Even now, I can’t watch the TV for a few hours without seeing someone I’ve met during my chequered career. 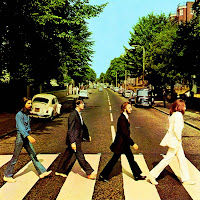 Things at work went from strength to strength and in my second year I decided it was time to spread my wings a little and find myself a small apartment of my own. Hughie was straight on my case and escorted me around several properties he though suitable. I settled on a little studio near Swiss Cottage. Unfortunately it was directly above Finchley Road Underground station, and day and night, my cups and saucers, my photo frames and pot plants vibrated and rattled as the trains rumbled beneath me. I put up with it for a year before moving to a little bedsit in St Johns Wood, close to Abbey Road Studios where the band of the moment, The Beatles recorded all their music. Just up the road was the zebra crossing across which the Fab Four famously walked on the cover of their Abbey Road long player. It was during that time that I met a girl that was eventually to become my wife, Sarah.I’m not certain that her parents approved of me at first. I got the impression that they blamed me for her dropping out of full time education. However, as things progressed I became part of her family and after a while was asked if I would like to rent a flat from them along with two of my workmates, Bernie and Mike. More about them later! And so we did, and I found myself back in Finchley not a stones-throw from the digs I started out in. 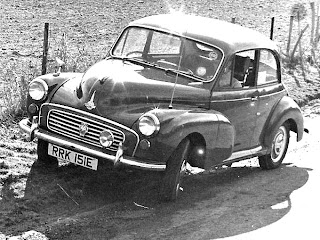 The next year,1967, things really went my way. Firstly, I was offered my first company car! On a snowy January day along with nine of my colleagues, I duly turned up at the showroom of S G Smith Motors in Canning Town, east London. On the forecourt stood a crescent of gleaming Morris Minors with consecutive number plates, RRK147E upwards.There were whites ones, green and pale blue ones. But in the middle sat a brown one. I commented to the guy standing next to me that I hoped I wouldn’t get it. He agreed saying that it looked like a dog turd on wheels. Half an hour later I was handed its keys. I told the car salesman that I didn’t like brown cars. He said “ Don’t be so ungrateful lad, and in any case it’s not brown” He stood to attention, and with a roll of his R’s and an false posh accent he said “Rose Taupe young man, it’s Rose Taupe”  That night we held the first of many parties at the flat, and one of our guests went down into the street as he was feeling a little worse for wear. He was promptly sick all over the front of my new car. To me, that said it all! Anyway, I accepted my fate and that weekend I drove it back to Hailsham to show it off to my friends. At that stage their means of transport was a bicycle or at  best an old banger, so not surprisingly they were impressed!

The other big event of the year was my promotion to a Product Specialist. Hughie Holmes handed me over to Tik Fasham, a short man with neatly parted glossy black hair and a thin caterpillar like moustache. He wore an immaculate pin striped suit and a permanent sergeant major expression. Things were about to get even better!