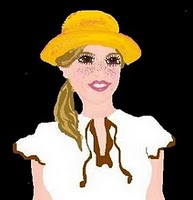 It was time to say goodbye and not a moment too soon. Uncle Bert was descending the staircase with one hand gripping the banister rail and the other holding on tightly to the top of Auntie Betty’s arm, the wrist of which was encased in a plaster cast and the remainder suspended in a sling. My friend Rosey was a couple of steps below hoping that the hapless pair above didn’t miss a tread and come tumbling down on top of her. There had been enough excitement in the last few hours to last a lifetime – well, for a while anyway; Rosey’s life is usually pretty eventful, and this was just another chapter in her book of adventures!

Auntie Betty and Uncle Bert had decided to visit Eastbourne for a couple of days and lap up some rays in the Suntrap of the South . As you know dear reader, Rosey has a seafront apartment a couple of floors above beach level with a fabulous view of the English Channel (or La Manche as our snail eating cousins a shell’s-throw across the water call it). Betty and Bert saw no need to fork out for bed and breakfast accommodation when their niece had an empty  spare room. No B&B for B&B! So they invited themselves to stay for supper, the night, and for breakfast. It was sort of ‘what goes around comes around’ because Rosey regularly stayed with them as a child. Auntie was fun because she was a little eccentric, and Uncle was jolly and rotund, so she referred to them, behind their backs of course, as Batty Betty and Uncey Chunky!

Anyway, they duly arrived late Saturday afternoon armed with a cake shaped like a cat covered in sticky sweet chocolate icing with staring eyes which followed you around the room as if to say ‘come near me with a knife and you’ll regret it’! Actually it was delicious and they all enjoyed it despite the disapproving looks from Rosey’s feline friends Fuzzybutt and Scruff as it was chopped up and handed round in bits on plates!

As for supper, she’d played safe and got Mike, the chef at The Bike, to knock her up an all-in-one-pot  tofu concoction which required nothing more than an hour in the oven to emerge as something Rosey had seemingly prepared all by herself! And, she got away with it!

I forgot to mention that Batty and Chunky were non-drinkers and they always made Rosey feel really guilty if she ever imbibed in front of them. Having said that, she’d always doubted her Uncle’s apparent support for the Temperance Movement due to his magnificent ruby red nose and matching cheeks, and the ever present whiff of mint about his breath. Consequently she was not looking forward to supper as she would have to forego her customary glug or two of Chardonnay. But ever prepared, Rosey had come up with a cunning plan. She bought three very large bottles of water and two of them she half emptied then topped back up with generous measures of vodka! Invisible booze! She just needed to be very careful when pouring water to make sure she gave herself the alcoholically infused variety, and her guests the water bottled as Mother Nature intended. I know what you are thinking – you recon she got them muddled at the table in true Rosey style, but you’d be wrong. Everything went exactly to plan. But that was just the beginning!

It was about three in the morning, and Uncle Bert couldn’t sleep. He crept out of bed and tip-toed to the kitchen. Apparently it’s what he often did; only at home he would sneak outside to his shed where he kept a bottle or two of whisky.  He’d obviously spotted a bottle in Rosey’s cupboard when she was preparing the feast. Things went well for him until he returned to the cupboard for a third glass and accidentally trod on Fuzzybutt’s tail causing her to object in the loudest possible fashion. Rosey remained sound asleep thanks to her holy water, and didn’t stir, but Auntie Betty woke with a start, only to find her hubby missing. She jumped out of bed and turned on the light thereby giving Bert a warning that he was in danger of being caught out. He downed his whisky in one, pulled open the fridge door and grabbed a bottle of water. This time, whatever you are thinking is probably spot on! He’d got hold of Rosey’s special mixture. That’s when the fun began. He said that he was thirsty and had come to the kitchen for a drink of water. Auntie B said that she’d have some too as she was now wide awake. Fast forward an hour and things were really hotting up! By then Betty had found her way onto the balcony and was singing whilst performing the Can-Can, nightdress in hand, to a couple of startled sea gulls sitting on the railing. This woke up a few of the neighbours who appeared on their balconies to complain. But Betty just kept going – until that is, a Police patrol car ground to a halt on the road down below.

By now Rosey had awoken from her slumbers and was trying to drag her Aunt off the balcony and back inside. Uncle was in fits of laughter. The door intercom rang and Rosey was not surprised to hear the voice of one Police Constable Jenny Prior requesting entry.  A couple of minutes later the WPC was in the apartment. Uncle Bert, through his alcoholic haze, must have let his mind wander back to a stag night he’d been on some time in the past and assumed that Jenny was there to give a performance. He slapped her on the butt and yelled “Off with ‘em then”. She said she’d deal with him later and carried on to the balcony. Betty suddenly stopped as if someone had unplugged her, and instantly sobered up. Unfortunately she tottered backwards and tripped over Scruff landing rather awkwardly on the floor, and in doing so it seems she broke a bone in her wrist. WPC Jenny Prior decided to take Betty to A&E herself rather than call an ambulance, so off she went while Rosey made Uncle Bert a mug of strong coffee and listened to his confession about his secret drinking. Then Rosey confessed about the secret water he’d been knocking back. At first light she called a cab and they went to collect a somewhat chastened Aunty Betty from Eastbourne DGH. Fortunately the Police brought no charges against Burlesque Betty; she just got a warning about keeping the peace in future.

Rosey got great pleasure from telling us this tale in The Bike the other night. For her, it must have been great to be the sensible one in a hilarious situation rather than the other way around!