Written for Sunday Scribblings and Carry On Tuesday

It could so easily have been the shortest story ever told. When he entered the world it was as if he didn’t like what he saw or sensed or felt. He was a discontented child who seemed to have resented the efforts of those who had fought to save him as he struggled to take his first breaths. At school he was a loner who shunned the efforts of his peers to befriend him. To fill his days he crammed his head with the information meted out by his teachers. His raison d’être was the pursuit of knowledge, leaving no time for the banality of social intercourse or interaction with those whom he thought inferior. 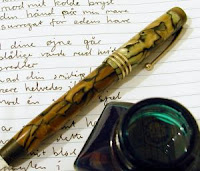 At university he shunned the seemingly obligatory revelry and carousing which went on outside his gloomy room.  There he sat night after night; pen in hand, scribbling on endless sheets of paper, bathed in a shallow pool of light from an ancient anglepoise lamp. Ten, twenty, thirty years later, he still sat a desk every night. Still he wrote, every night. His days were filled with vain efforts to instil knowledge into the brains and hearts of disinterested students whose only thoughts were when and where they would next be squandering their allowances.

One day he wasn’t there. His students waited on the old oak benches, before the creaking platform which was that day silent. A visit to his little room found it to be vacant. There was nothing there. Nothing that is, but an enormous pile of papers on top of which sat the fountain pen he’d used since a child and a bottle of ink. After almost sixty years living in a world which seemed alien to him he’d simply disappeared. He had long since disowned his family and he had no friends, just casual aquaintnesses who were as mystified as every body else about his whereabouts.

No one could have imagined what the mighty tome contained. It was a story; a long story about a way of life he’d never experienced. It was a novel, a story of a life with the highs and lows that all of us experience. It was filled with joy, yet sometimes tinged with sadness. A story of relationships and adventures, successes and failures. A story of a life he never experienced yet somehow understood, tales even of licentiousness and debauchery.

It ended abruptly; the work was unfinished. Where was the rest of the story?

A shaft of sunlight fell like a spotlight on his discarded lecturer’s gown which lay crumpled on the floor in the corner of the dismal room. Sitting atop was a screwed up piece of paper. On it were written just six words.  ‘The best is yet to be’