When I was a baby I was confirmed into the church. I didn’t know what was going on of course. Some hairy bloke in a frock and wearing a dog collar tried to drown me, but I later discovered that this was normal practice. It seems that on that day three people known as Godparents promised to ‘provide me with the resources, opportunities and encouragement to follow Jesus’ then dripped molten wax all over me from the lighted candles. Can’t remember who they were. 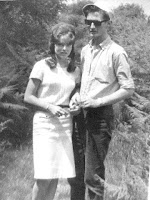 When I got my first girlfriend I promised not to go out with other girls! Fat chance! They usually promised to be faithful. I actually believed them! Fool.

Then I got married. The ultimate promise. I’m pretty sure I promised to love honour and obey. Obey! I ask you! Mind you, had I been an Apache I would have promised to ‘look for what was right between us, not what is wrong’. If I had been old, I would have promised to be ‘brisk and vibrant’! Eskimos promise to let ‘their feet run and their feet dance’. Presumably to avoid getting cold tootsies! Anyway, I did the wedding one several times but I’m not so sure that I included the obey bit each time! Come to think of it, the other promises proved a little difficult too.

Since then promises have come thick and fast. Ones I have made and ones I’ve received. Some have been kept, others have not.

Trouble is so many promises are worthless. I should know!
.
.
.
The Stranger - part 7