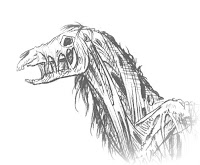 It is said that many years ago there lived nearby a hideous creature that terrified the folk of the village. They say it lived in the uliginous wasteland beyond the river. Some people claimed to have seen it. It was the size of a deer they said, but with muddy ulotrichous hair, and unguiculate talons. Everybody heard it. When the moon was high it would ululate from sunset ‘til dawn, seemingly ubiquarian; close by one minute and distant the next. So loud was it that even window panes were known to rattle and roof tiles vibrate.

Whether it be true or the stuff of legends I know not. Some nights I lay awake and listen to the sounds of the night beyond my window.  One part of me wants it to be true, the other lives in fear of the creature’s return.

I tried to make a recording of the tale, but with each attempt, I got into more of a muddle. I gave up at number fourteen. If you want a laugh at my expense it's right here!

Picture by Dewilish at deviantART