A short story for your delectation

A journey back to the 30's for this week's Sunday's Whirligig. I managed to use all but a couple of the given words.

Every Thursday Lady Gwendolyn Maltravers met her friend Miss Olivia for lunch in the town’s most fashionable eatery. However, on this occasion she was alone. The waiter was weaving his way between the tables. ‘Are you ready to place your order Lady Gwendolyn?' he asked.

‘Not yet' she said. 'I’ll just give Miss Olivia a moment or two Jackson'. It was odd. Olivia was usually the first to arrive. 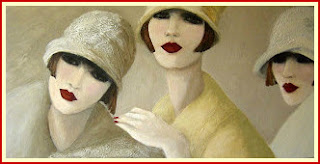 The restaurant was filling and instead of the usual contented mumbling, there was an air of excitement about the place. Something must have occurred and it was clearly the talk of the town. Gwendolyn noticed that people were picking at their food whilst furtively glancing towards her table. Things were being whispered behind hands. What was going on?

A gentleman man walked through the door. He looked around. Seeing Lady Gwendolyn, he walked over to her table. He introduced himself as Thompson, Olivia’s butler. She could tell by the pained expression on his face that something was seriously untoward.

Without invitation, he slumped down onto a chair and helped himself to a glass of Chateau Mont Claire '29. His hand was shaking, but he downed it in one long gulp. He then composed himself.

‘Miss Olivia met a gentleman last night Madam’ he started. He explained that Olivia had met this man before. Apparently he had charmed her on many an occasion, but last night she had fallen for his seductive ways.

'When she awoke this morning, she was alone in her bed. What had happened next was totally beyond comprehension Madam' he said.

'She ordered her chauffeur to drive her to the gent's office, where she burst in and produced a revolver from under her cloak. All it took was a single bullet and he was no more Madam. In no time at all several officers of the law  arrived. She was taken away in a wagon and placed in a cell. However, minutes later a gang of hooligans with firearms rushed into the police station and took Miss Olivia away at gunpoint'

He bowed his head and took a few deep breaths. A tear dropped into his empty wine glass. Then, sitting bolt upright, he told her that Olivia had been found wounded, left for dead and tied to willow tree just outside the town. She was rushed to the infirmary where they fought to save her as she became increasingly weaker.

Lady Gwendolyn’s tortoise-shell cigarette holder dropped from her fingers. She was uncharacteristically speechless.


‘She requested I attend her bedside Madam’ he continued. ‘I was just in time. With her dying breath, she told me to deliver you this message'

With that, several eaters stood, pressing clarinets to their lips and clutching violins beneath their chins. Rising to his feet, Thompson burst into song.