Previously in A Chequered Career - One regular visitor to our shop was a sales representative or a ‘traveller’ as they were then known. I always envied him.  His suit was sharp, his shirt and tie immaculate and his shoes glossy black.  But best of all, he had a shiny company car which he parked in the street outside. I made up my mind that one day I would be a traveller too. 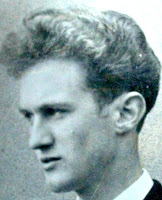 Just after my 18th birthday I found myself nervously fiddling with my ticket on the steam train to London, where I was to have an interview for a job as a travelling salesman. I had never been there in my life. I was a simple country lad brought up in a market town surrounded by open countryside dotted with sheep and cows and creatures various. Looking out of the carriage window I watched with some trepidation as the green fields were gradually replaced by regimental rows of terraced houses, and factories belching smoke from chimneys which seemed to reach the sky. And then I found myself standing, dazed in a huge railway station where people dashed this way and that like so many frantic ants. My interview was to be in an office directly outside the station so for today anyway I wasn’t going to have to burrow down into the mysterious world beneath my feet where subterranean trains wriggled their way below the city streets.

I sat in a bland reception area of the Lamson Paragon Limited office suite for what seemed an eternity. At one point a stupefied young man came out the office, his wide eyes staring unblinkingly ahead. I began to wonder what I'd let myself in for. Eventually I was escorted  by a secretary into an oak paneled office at the far end of which stood an ornate desk. Behind it sat an expressionless gentleman in a black suit, white shirt and blue silk bow tie. “ECMB, this is Mr Keith Hillman” barked the woman whilst pointing her red tipped finger to a little chair on which I was to sit for my interrogation. He introduced himself as Ernest Brown, better known he explained as ECMB. A bit odd I thought, but this was after all London, and people were different there. He was a rotund man. He sat with his balding head leaning back, and stared at me from bottom of his bifocal spectacles. I can still see his pinched little mouth. His whole demeanor and his hissy vocal delivery put me in mind, somewhat scarily, of Alfred Hitchcock.
. 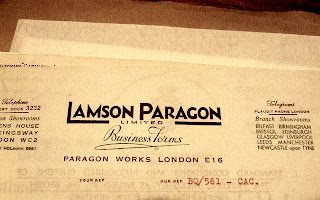 I don’t remember much about the questioning itself, but I must have made the grade because at the end of my grilling I was told to report for duty in two weeks’ time. It was at that point a skinny man in his fifties appeared wearing a shabby baggy brown suit, shiny at the knees and elbows. A grey nicotine stained moustache adorned his thin top lip. "Thish ish Hughie Holmesh" hissed ECMB, emitting a fine spray which sparkled in a shaft of sunlight coming from the window. "He is to be your friend, guide and mentor" And so he was. Within three months there wasn't a pub in North London I hadn't visited nor a blousy barmaid I hadn't been introduced to. But more of that later!
.
Hughie Holmes was to aid and instruct me in the world of personalised business forms, receipt pads and continuous multi-part forms for those new-fangled machines called tabulators. I was to travel the North West postal districts servicing existing customers and seeking out new ones. The company was to arm me with a brief case stuffed with samples, a box of business cards, and grant me unlimited tube and bus fares. A car would be supplied sometime in the future if and when I had proved myself.
.
My family had friends-of-friends in London, and it was per-determined that should I be successful in gaining employment up in the ‘the smoke’ (as country folk call it) I would rent a room with them in the type of accommodation referred to as ‘digs’. Mr and Mrs Davies’ house was in the leafy suburb of Finchley. They shared it with their son Daniel who was a car salesman with Henley’s, the Jaguar dealer. His company car was a red E-Type.

To look the part I needed a couple of suits. I visited a branch of John Colliers where I was duly measured for two snazzy double-breasted outfits which featured fashionable flared trousers and wide lapels; I got some platform shoes, a few shirts with long droopy collars and several brightly decorated kipper ties. I was wearing the official uniform of the 1964 man about town!

And then reality struck me. I was all grown up and about to start my first big adventure!