Cambodia - a country of contrast and contradiction.

A couple of days ago I returned from Cambodia. Nothing I’d read or heard before I left could possibly have prepared me for what I was to experience. Pictures, beautiful as they were could never have portrayed the sights I was to see. Words no matter how eloquent could ever have described this fascinating and intriguing country or its people.

Please bear with me while I give you a bit of background. Cambodia has a very chequered history.

As part of the Angkor Empire from the eleventh century, it suffered sustained attacks from the Vietnamese which ushered in a long period of decline. In 1863 it became part of French Indochina. Following Japanese occupation during World War 11 Cambodia gained independence from France in 1953.

In April 1975 the communist Khmer Rouge captured Phnom Penh and evacuated the city. Most of the population was sent into the country to work on the land and in paddy fields, but many were held in prisons by Pol Pot. More than 2 million Cambodians died from execution, forced hardship or starvation under his regime.

In 1978 the Vietnamese drove the Khmer Rouge into the countryside and started a 10 year occupation setting off 13 years of civil war. UN sponsored election in 1993 calmed things down, but factional fighting in 1997 ended the first coalition government.

The Khmer Rouge surrendered in 1999 and their remaining leaders still await trial for crimes against humanity. Elections in 2003 led to a new coalition government. National elections in July 2008 were relatively peaceful. 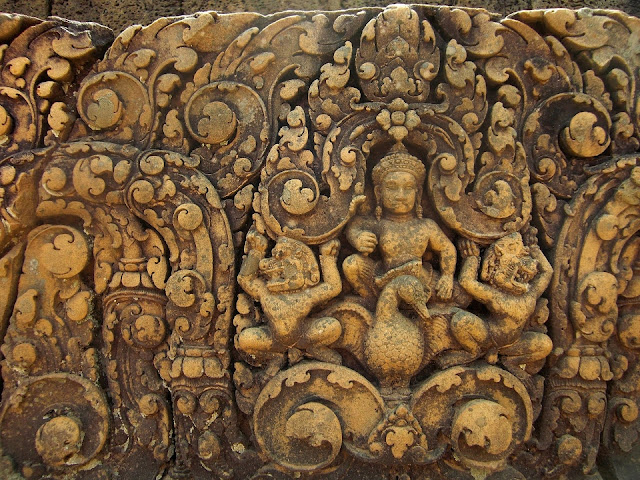 I normally travel on my own, but on this occasion I chose to join a small group on an escorted tour courtesy of Peregrine Adventures. We started our trip in Sien Reap, a bustling city where new hotels and modern shopping malls are springing up all over to cater for their new invaders, tourists! But alongside the world’s banks and glossy apartment blocks sits the old heart of the city with its ancient market and winding river. A walk along its bank and out of the city took me to a barrier which was put in place to hold back the rubbish would otherwise have flowed into the city. And beyond the barrier the banks are lined with shacks which sit above the water on stilts. This is the Cambodia of today. 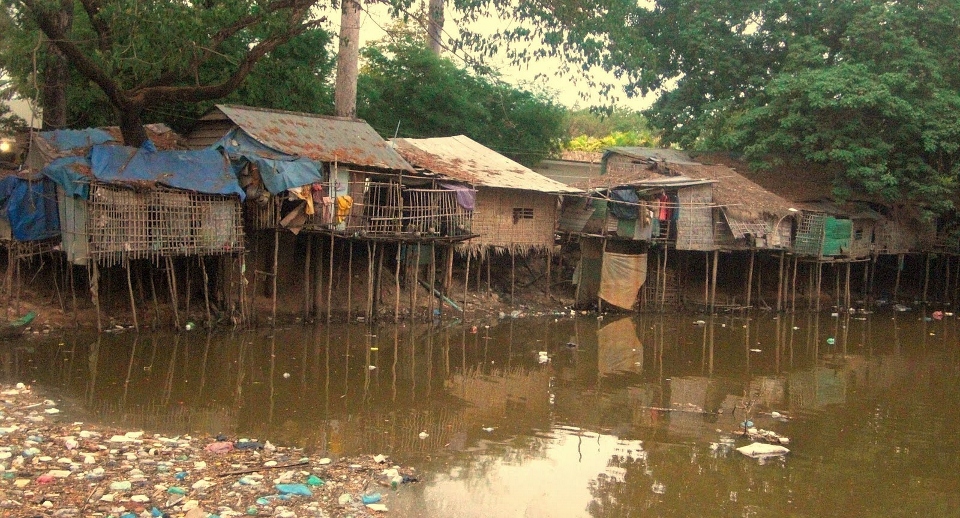 But the reason for Siem Reap’s popularity starts a couple of kilometres outside of the city in the area known as Angkor.150 years ago the French discovered in the jungle the remains of some the most spectacular buildings on the planet. No less than 18 temples, some of which were small villages. 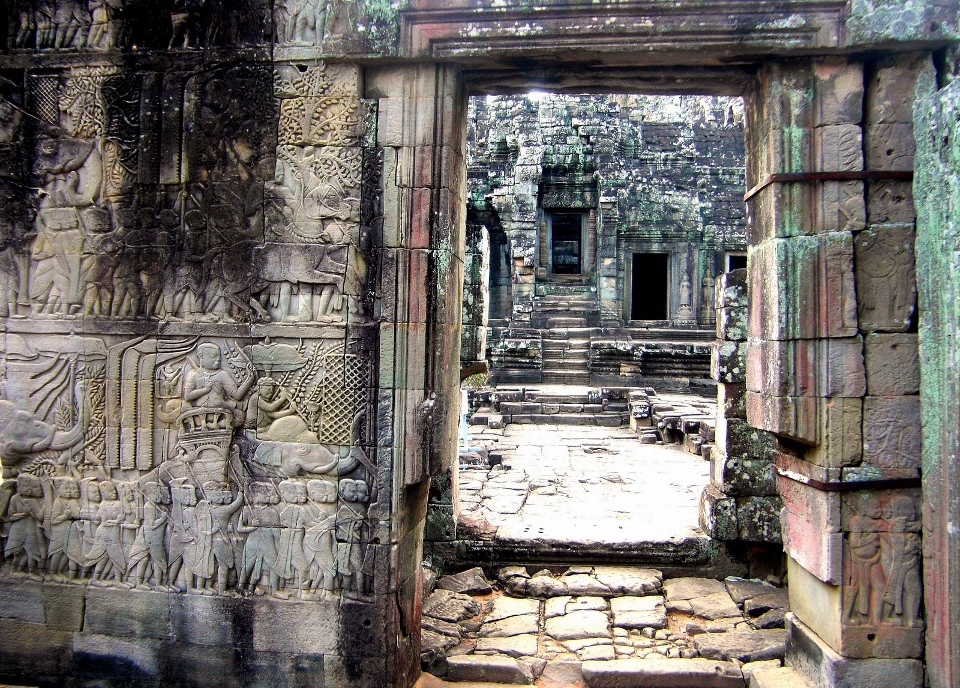 The largest and oldest of these is Angkor Wat. Built in the 12th century, it remains in remarkably good condition mainly due to international assistance in preserving this world treasure. Today it is featured at the centre of Cambodia’s national flag. 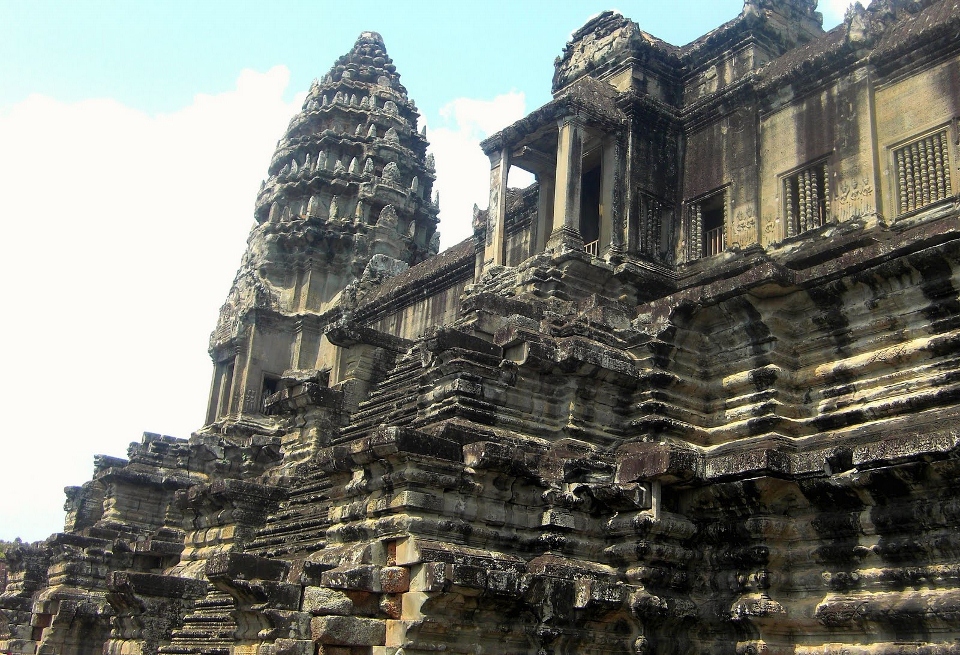 The most amazing of the Angkor temples has to be Ta Prohm. Dating back to the 13th century, the buildings have been completely overwhelmed by grotesque silk cotton and fig trees. 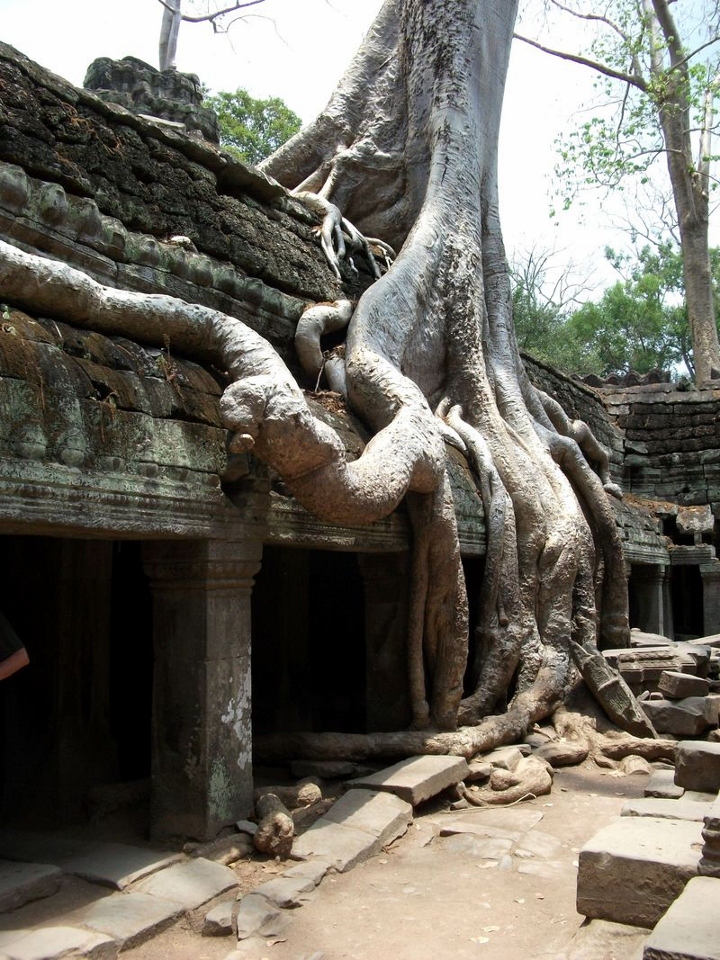 In total contrast Angkor Tohm remains virtually as it was in the 12th Century. It is huge, and is thought to be the original capital city of Angkor. The main building features the four faces of Buddha. No photo could ever do justice to these enormous effigies. 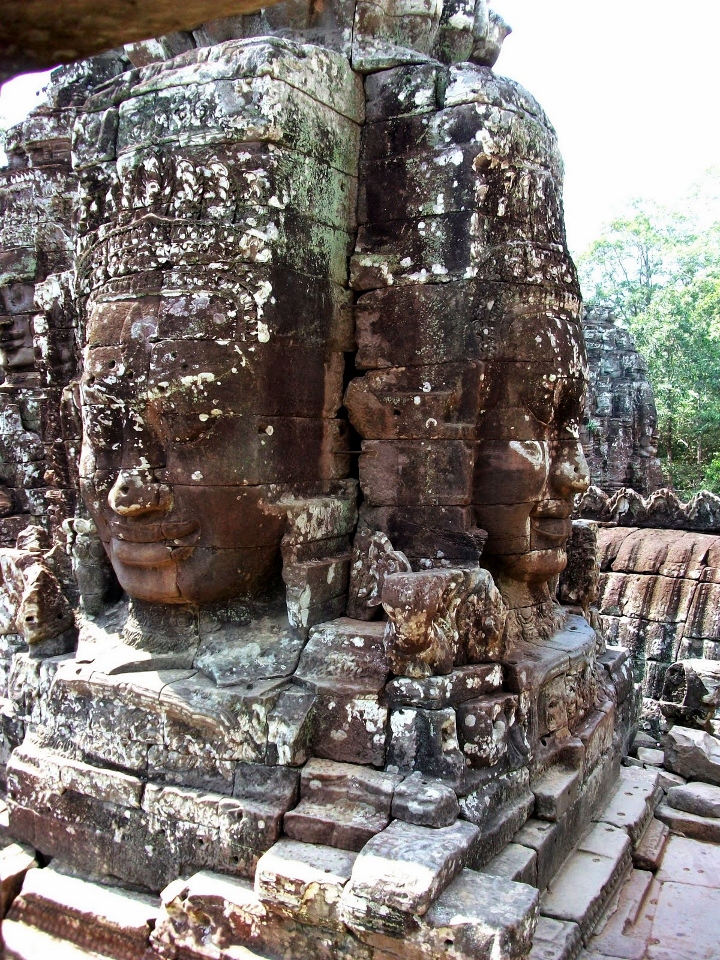 I visited five temples in two days. I have never climbed and clambered so much in my life! I’ve decided that if the steps I endured are anything like those to heaven I’ll give up being good right now! 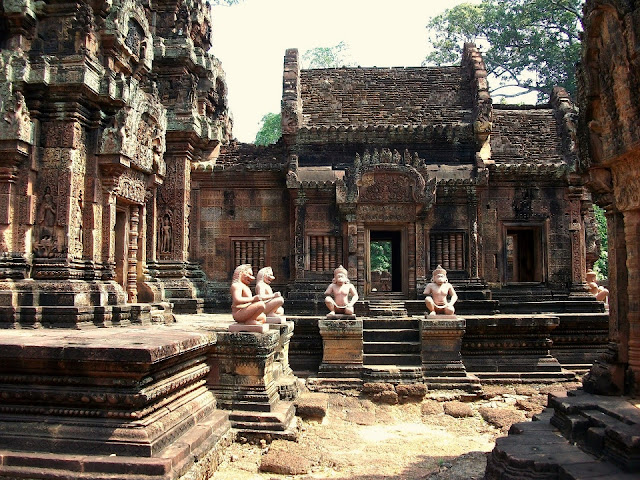 In Cambodia most children cease to be coddled by the age of four. Only about 30% of them go to school. The remainder are either abandoned to live on the streets, or are expected to earn their keep in the family home. This used to involve straightforward begging, but in recent years this has been discouraged, so now the kids stop you at every opportunity to sell their guide book, postcards or bangles. As a salesman myself I have nothing but admiration for their skill! Generally speaking they are well turned out and have a grasp of each of the languages they are likely to encounter among the tourists.

A number of charities have been set up to take the kids off the streets both in Sean Reap and the capital Phnom Pehn. Their aim is to give them a basic education and a trade such as car mechanics, plumbing, arts and crafts etc. The public faces of these institutions however are the restaurants which have been created to teach children the skills needed in the fast growing hospitality sector. We visited two such restaurants. Having cooked and hosted myself, I was completely in awe of the way these restaurants performed. The food, the service, the ambience, everything was as good as any first class establishment I’ve visited. 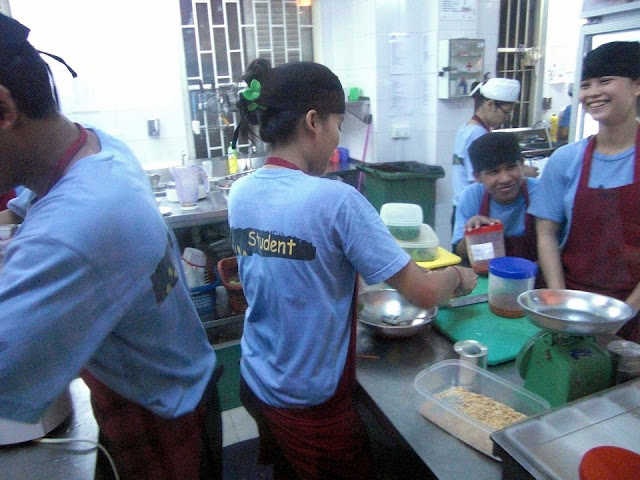 At the centre of every Cambodian community you’ll find a market. Meat, vegetables, eggs, fruit and fish sit outside in the searing heat. At every turn your nose is assaulted by a different smell, sometimes disgusting, but often fragrant. Vendors sit either on the ground or in the centre of their tables surrounded by their stock. 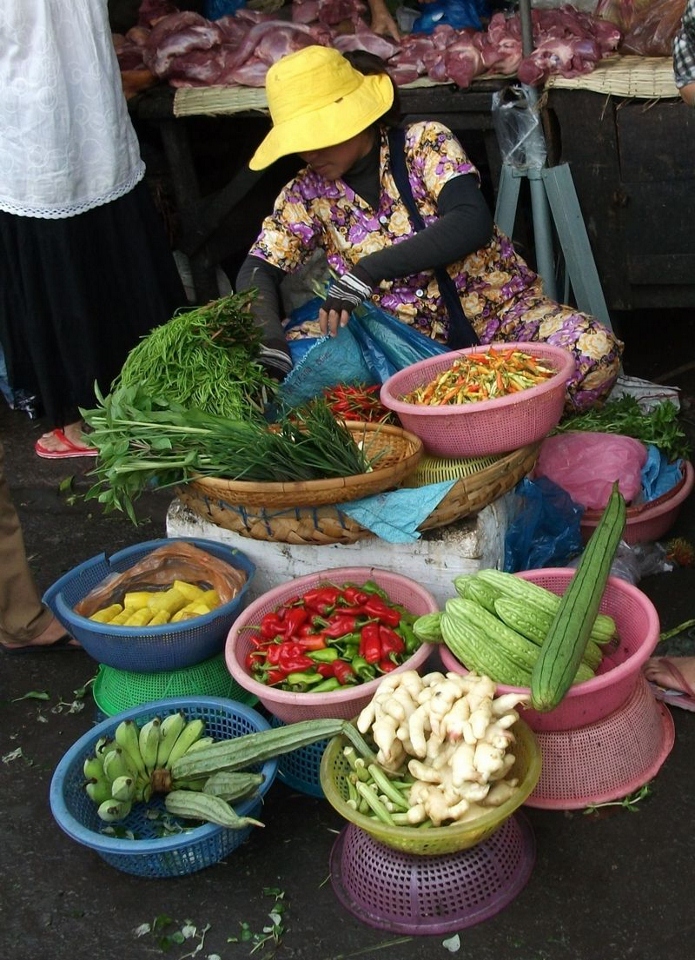 I mentioned at the beginning the period of rule by Pol Pot and the Khmer Rouge. One reason for visiting Cambodia is to see up close the appalling atrocities inflicted on the Cabodians during that time. We took a flight down to Phnom Penh where we visited S21, one of over 100 Khmer Rouge prisons. It was created from a large school which was abandoned when the residents of Siem Reap were driven out of the city. Here prisoners were held for various reasons. Many had been accused of taking part in anti Khmer Rouge activities; others were prominent people who were thought to have information useful to Pol Pot. Some had simply refused to leave the city. Here they were interrogated and tortured by soldiers who in most cases were between just ten and seventeen years old, young enough to be brainwashed and drawn into the Khmer cause. Accommodation was either in large rooms where one prisoner would be shackled to a bed, or in classrooms which were crudely converted to tiny individual cells created from brick or the wood from school benches and desks. 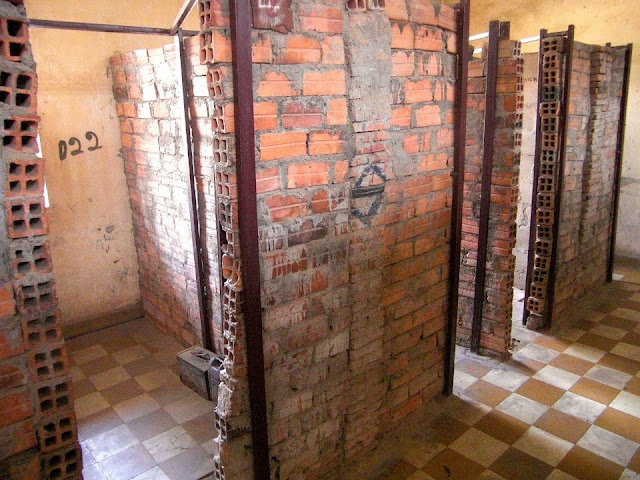 When their captors felt that were no longer of use to them they were taken to a nearby killing field where they were murdered and thrown into mass graves. Babies and young children were beaten to death against the trunk of the killing tree which stands today as a reminder of those awful times. It’s a sobering thought that this was going on just 40 years ago during many of our lifetimes. 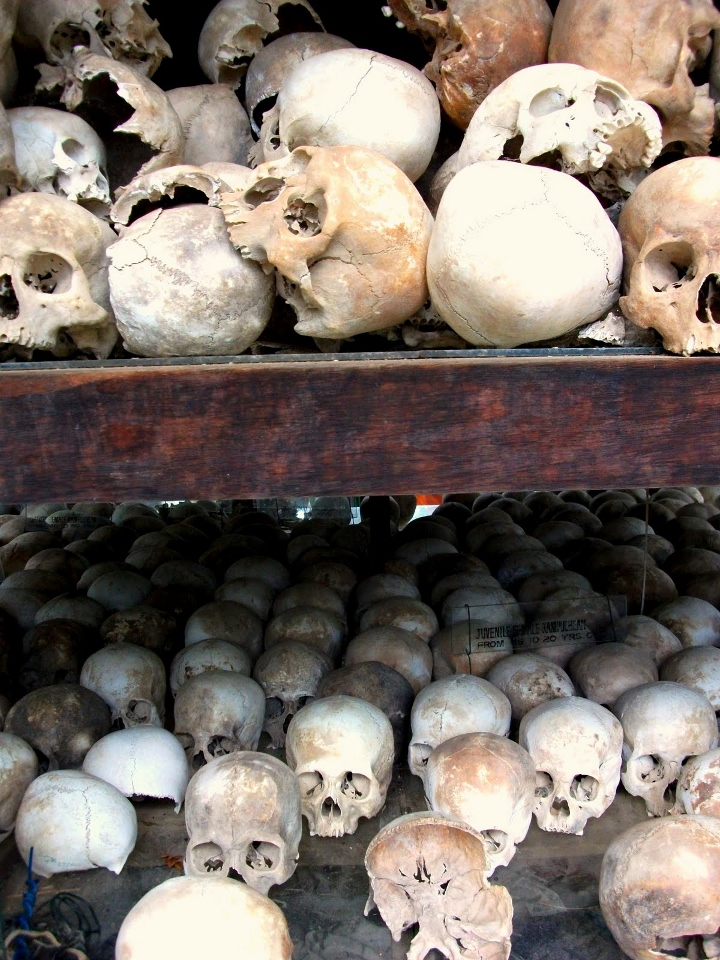 Landmines have become synonymous with Cambodia. More than 10 million were planted by the Khmer Rouge and at least 6 million still remain undetected, all these in a country with a population of just 11 million. It is a sad statistic that 98% of those killed or maimed by these devices have been civilians. People with missing limbs are a common sight wherever you go.

The royal palace with its surrounding buildings is truly spectacular. After days of visiting ancient black and grey temples, the bright colours of the buildings came as quite a surprise! 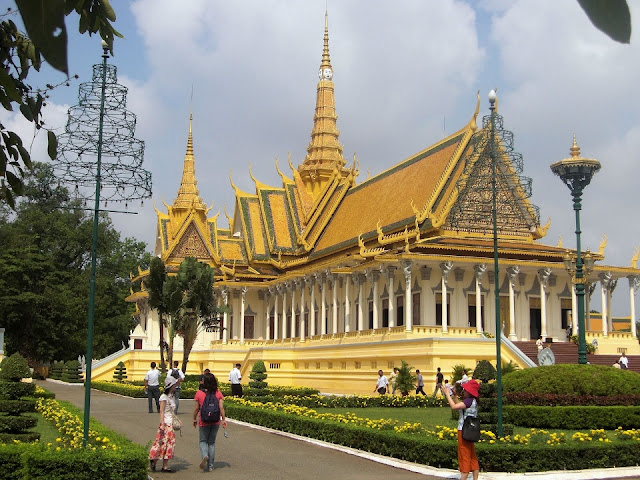 My final cultural visit was to the wonderful pagoda which houses the national museum. It’s stuffed full with Buddha’s, statues, and ancient artefacts which date back to the 9th century, and at in the centre there is a beautiful tranquil garden with ponds filled with koi, bold plants and enormous flowers. 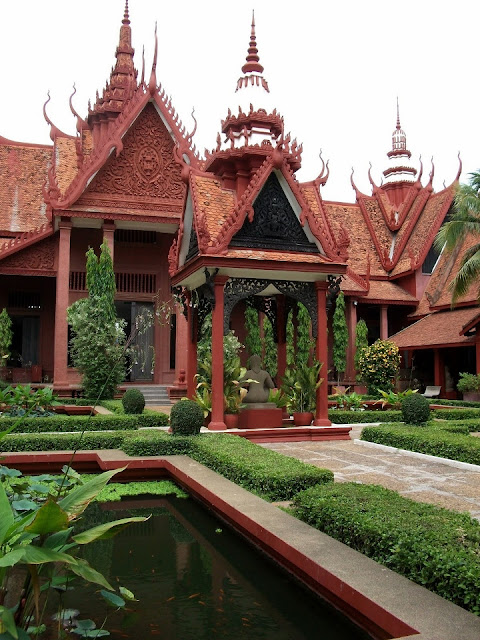 I’ve written far more than I would normally after a holiday, and if you’ve stuck with me this far, I thank you most sincerely. I could have written several more pages but I won’t push my luck! I’ll end by thanking my travelling companions, Penelope and Ian, Martha and John, and Sue all from Australia. Also Tanya from here in the UK. I couldn’t have wished for a nicer bunch of people to spend my week with. Huge thanks also to Peregrine Adventures for organising such a wonderful trip. 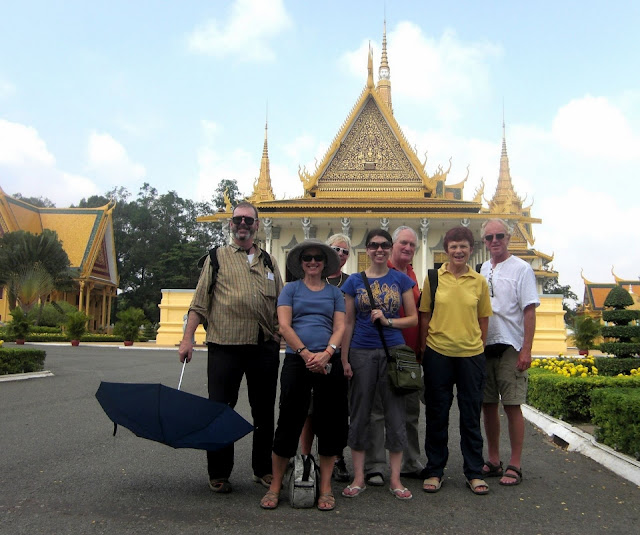 I've used just a handful of pictures above.