This week I'm returning to (Fiction)Friday. I will keep the prompt to myself so as not to spoil my story!

He awoke with a start. Through the gap in the curtains he saw sunlight. He realised he was in bed alone, he was confused. Where was Jane? He’d overslept. That was it. But why hadn’t she woken him? And it was Saturday, she always stayed in bed a little longer at the weekend. 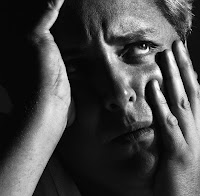 He sat on the edge of the bed trying to get his mind around what was going on. Images began to fill his head. Things he'd done, things he'd said. During the past few weeks he'd ignored Jane's pleas. He closed his eyes and saw her anguished face, tears running down her cheeks. He heard her voice warning him that unless he changed, she would leave. He'd not taken her seriously. Jane would never leave me he thought.
The bedside clock said eleven fifty nine. Eleven fifty nine pm. PM? But it was daylight. It must have stopped last night.
The telephone rang downstairs. He rushed out of the room and stumbled as he ran down stairs two steps at a time. He grabbed the phone and steadied himself against a doorframe.
‘Is that John Thompson?’ asked a man’s voice at the other end of the line.
‘Erm, er...’. What was happening, for a second or so he’d forgotten his own name. ‘Yes, er yes. Who’s this?’
‘It’s Sergeant Foster... Bridgenorth police? We have something of yours here at the station’
‘My wife, you have Jane, my wife!’ he yelled. Even as he said it he knew he sounded stupid.
‘Mr Thompson, are you alright?’
‘Alright? Am I alright? Yes,yes, of course. I’m sorry Sergeant. What exactly do you have of mine?’
‘Your mobile telephone sir. It was handed in this morning. If you remember, you reported it lost a month or so ago. We just need you to call in and collect it’.
He went back upstairs and pulled a few clothes on. After another quick look around for his watch, he wandered outside and jumped into his car.
Everything around him seemed to be moving in slow motion. The cars in front of him were crawling. He pressed his horn. He pressed it again. The traffic continued at a snail’s pace. One by one they turned off. At last, he thought. He pressed his foot to the floor and began to hurtle forward.
Suddenly a woman wandered out in front of him. He slammed his hand on the horn and stood on the brakes. His car screeched to a halt, but the woman continued to meander across the road without even acknowledging him. He sat for a moment with his head in his hands, and then slowly started off again.
His eye was caught by a young lady wandering along the pavement. It looked like Jane. It was Jane. He slowed the car, wound down his window and called to her. ‘Jane’. She carried on walking looking down at her feet. She hadn’t heard him. ‘Jane’ he shouted, but she turned down an alley and disappeared from sight. What on earth was happening?
He climbed the steps to the police station. It was strangely empty inside. He pressed the bell on the desk but no one appeared. Pressed it again. Nothing stirred. He decided to leave but then he heard a voice behind him.
‘John Thompson I assume. Come for your phone?’
‘Erm, yes. I am... I mean I have’ John stammered.
‘We had to look at your messages when we were trying to ascertain that the phone was yours. It was after all, thirty days ago that you lost it. One message concerned us Mr Thompson. It was sent to you on the night you reported it missing’
Foster slid the phone across the desk. John felt dizzy, hot, cold, all at once. He flipped the phone open and turned it on. The screen told him he had one message. His fingers suddenly felt like jelly as he struggled to press the key.
It was from a number he didn’t recognise. It read ‘You have thirty days left to live. Use them wisely'.